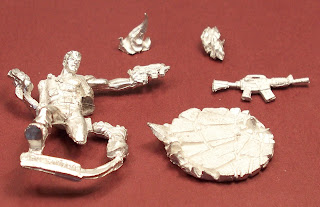 I just thought I'd post a bit about a conversion I am going to start work on. It is a Pulp City mini, a copy of which (not converted) I have already started tentatively painting. But when a percolating idea met another inspiration from my main hobby buddy, then this idea was born.

I had seen Sgt. Bale converted to have a larger than equipped gun, which was an idea I liked a lot. The aforementioned gaming buddy (Rob - whose own blog can be found here: Four Colour Super Minis) had mentioned - over rather tasty sandwiches while out shopping - about using a flaming head from a Wyrd Miniatures basing and accessories pack on an unrelated conversion of his own.

Suddenly I had a eureka moment. Visualising at that moment the contents of the pack (I was pretty familiar with it) I thought the head and a couple of other pieces would nicely complement the Sgt. Bale model, as well as the planned conversion. Such was the birth of this mini project. Which means I am adding another mini to my Pulp City Painting Challenge log of models to get finished before the end of the year.

The components are:
- Sgt. Bale
- parts (flaming skull head, base insert, flame piece) from the Wyrd miniatures Flame Base & Accessories pack
- a RAFM USX Modern M4-type gun (yes they weren't in use until years after the Pulp City setting of the 1980's, but I think it looks cool!)
Posted by pulpcitizen at 07:20