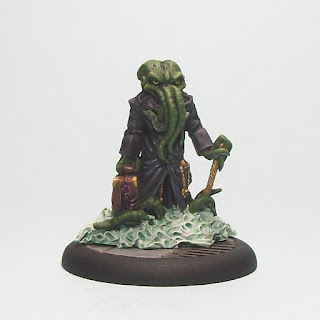 Mr. Kraken is the 130th mini I have painted for my own Pulp City collection, and after losing a lot of painting momentum overall in the past month or so, it has been nice to get another mini finished, especially for Pulp City and more especially for the Forgotten.

The paint job was done pretty quickly simply because I needed to feel as though I had finished something. I struggled with some of the highlighting to be honest, but it is done.

As soon as we devised the concept of Mr. Kraken I knew it was a mini I would look forward to painting - who doesn't like the idea of a Lovecraftian corporate raider! 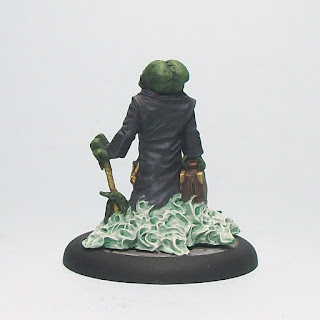 In game terms, Mr. Kraken is a Blaster whose Actions offer Damage, Mind Control and Suppress as FX. He also excels at targeting models with Trump MIND (who often will also have Trump SPIRIT, the Trait which defends against his Actions). Like all members of the forgotten, Mr. Kraken is a dangerous proposition - their downside as a team is that they are mostly Level 2 Supremes, meaning they will often be outnumbered, and they will often struggle to generate AP without good planning. His biggest weakness will be his low non-Trump AGILITY, making him a ripe target for sniper types who can stand off at good range (such as Gentleman, Ba-Boom and Trojan).