Setup
This Encounter pitted the forces of ARC (backed up by the mercenary Tangent) against an assortment of Heroes desperate to foil their plans. Both Teams have learned of a lost container of experimental isotopes that has been lost on the streets of Pulp City by a nefarious courier…
Seize the Isotopes is a ‘Quest’ Plot Encounter, played without any Citizens or Agendas (simply for speed of play). 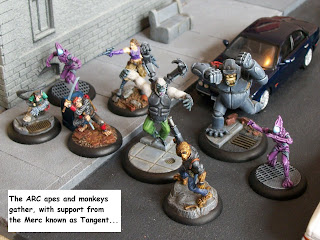 Apes & Monkeys & One Mercenary Human Gather!
Rob wanted to go all-out with ARC, having ‘bagsyed’ Silverager; bagsy is like calling ‘shotgun’ but more British and gentle… 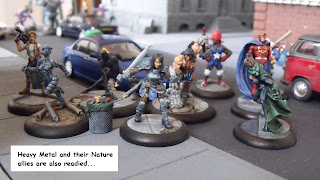 An Unusual Alliance of Heroes Responds! 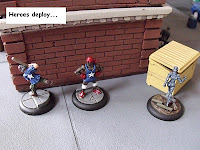 Leon selected a Team of two ‘sub-Teams’; 3 Supremes were from Heavy Metal, while the others were all unaligned Nature Supremes:
Dr Mercury (carrying his latest research project – the Mercurial Matrix); Chronin; Androida; Solar (bearing Ahau-Kin’s Tiara); Jade Hawk (who had tuned in her Police Scanner); and Stoner Hawk. The Heroes were helped out by citizens turned Vigilantes, reporter on the scene June Summers, and Jade Hawk took advantage of the terrain on offer to Rooftop Vigilantes.


The Ecounter: Seize the Isotopes! 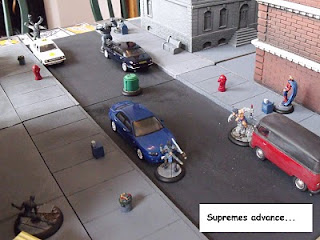 Supremes Advance
Both Factions had deployed their forces.
Chimp Chi – Sneaky Git that he is – had sidled up behind an apartment block. Meanwhile, Jade Hawk took to the rooftops. 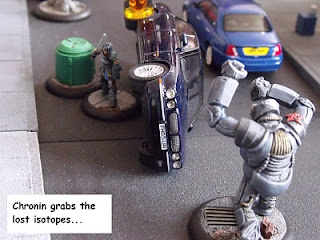 The rest of the Teams advanced, while Tangent lay in wait behind a brownstone. Dr Mercury activated his Mercurial Matrix, enhancing the abilities of his Team-mate Chronin, who folded time around herself and dashed forwards to claim the isotopes, constructing a Time Shield in the process and setting herself to Rewind the temporal flow if she needed to protect herself. 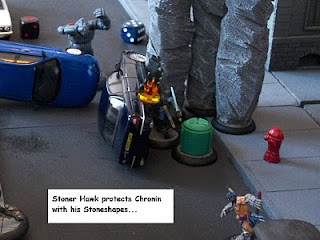 Apebot responded by Throwing a car at the brave heroine, but her Time Shield held fast. Stoner Hawk responded by erecting a wall of Stoneshapes around his ally Chronin.
Howler Strafed unsuspecting Dr Mercury, Chimp Chi Eliminated a Vigilante, while other Heroes and Villains moved up and June Summers used her Streetsmarts while trying to get her story… 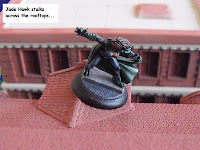 Rooftop Vigilante
Jade Hawk uses her Wires to cross from an apartment building to the nearby brownstone that Tangent had been hiding behind. 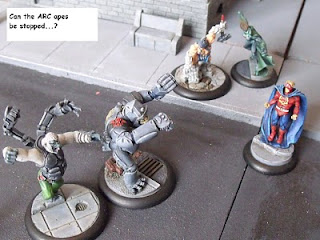 Supreme vs. Supreme
Chronin seized an opportunity to Act Fast, moving away from the looming threat of Apebot. At the first opportunity she created another Time Shield. Apebot took the chance to Throw another car, this time catching Chronin and Stoner Hawk, but both Heroes survived surprisingly unscathed. This allowed Stoner Hawk to take a retaliatory Strike against Virus, badly hurting the monkey. Tangent broke cover and unleashed her Geometry of Hurt, clipping Stoner Hawk, Solar and Chronin. Tuning in to her Police Scanner, Jade Hawk silently dropped from the brownstone behind Tangent before launching a Predator’s Charge to Strike Tangent from behind. Tangent fought back, finding Jade Hawk’s Weak Spot with her Precision shooting, only to later fall along with Virus to the Flaming Fists of Solar.
Silverager sought to intervene, using Apecraft to repair Apebot, before Dr Mercury moved forwards, while Howler’s Gun Bravado clipped Dr Mercury, although Chronin again survived unhurt. Sentry Bots fired on Dr Mercury, further damaging his mercurial body. He responded by Charging and Striking down one of the automatons. The lone remaining Vigilante failed to land a Strike on the elusive Chimp Chi… 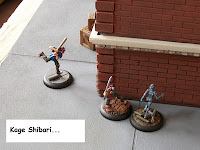 The Battle Rages On
Chronin moved to cover behind a nearby van. Meanwhile, Chimp Chi harnessed his Kage Shibari to disengage from the lone Vigilante to Strike Androida with the added force of Speak No Evil. He would later Incapacitate the poor robotic Hero.
At the same time the melee in the centre of the battlefield continued as Heroes attempted to halt the Villainous ARC: Stoner Hawk Smashed Apebot with a car; Apebot was able to Throw Stuff – hurling Stoner Hawk at Jade Hawk; Stoner Hawk sought Redemption by taking the brunt of the damage himself. Even Solar’s Sun strikes failed to have little impact against the exceptional Agility of those ARC Supremes within his range. 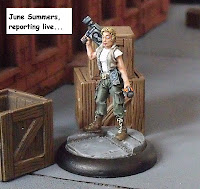 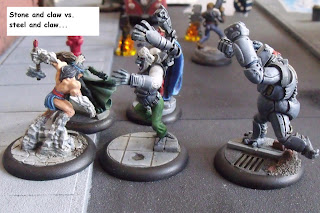 Supremes Fall
Solar unleashes a Strike at Howler who retaliates with his Gun Bravado before being cut down by a Flurry of Strikes by the plucky Chronin who has temporarily abandoned her Burden – the isotopes – in order to help her allies. Silverager uses a Spinebreaker assault against Solar, before the raging ape falls to the Strike of Stoner Hawk. 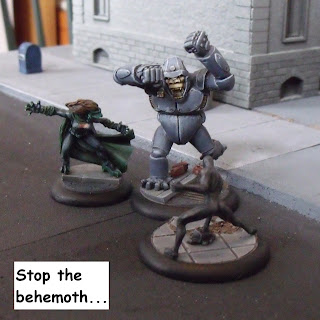 More blows are exchanged before Stoner Hawk throws up another barrier of Stoneshapes. Chimp Chi soon falls to Dr Mercury and Apebot stands alone. He eventually Throws Stuff to take out as many Heroes as possible – Solar falls Incapacitated, while Stoner Hawk seeks Redemption and sacrifices himself that Jade Hawk may continue the good fight… 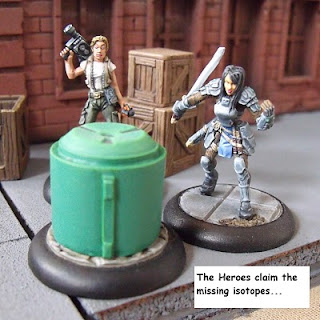 The Prize
Further futile blows are traded, but all that achieved is that Apebot is delayed from his target – the isotope. Chronin again claims the prize and moves further away from the clash, knowing she and her fellow Heroes have won this day…

Summary
The game resulted in an 8 to 0 AGP victory for me. Because we were pushed for time, we didn’t use Agendas, but something I would suggest is that Agendas are particularly useful for Encounters with only a single objective; that way the result is less binary and victory in the main Plot alone may not carry the day.

The last Quest we played saw a win for Rob, and that time he had taken the objective first – so it really does favour whoever seizes the initiative so to speak, which is another ‘tick’ in the Agendas box. Even though Rob won the Starting Roll for the first Round, having noted the advantage of seizing the objective he had last time out, I maximised my opportunity by using Dr Mercury’s Mercurial Matrix to boost Chronin who grabbed the objective and set all her defences ready, and added a Stoneshapes shield at the first opportunity. Therefore planning of combinations of Actions and effects is key to an Encounter plot like this one.

Another game I really enjoyed, and I am looking forwards to more and more, and hopefully more Battle Reports.
Posted by pulpcitizen at 03:25