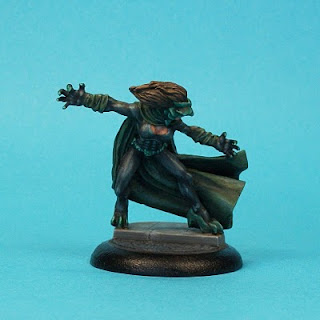 A voice whispers in the darkness….. “Armed robbery sounds like my kind of scene.” A dark figure leaps from the rooftop and into the shadows. The hunter has begun stalking its prey.

Okay, so it has been two weeks since I last posted a painted mini. This was the 51st completed mini of my Pulp City Painting Challenge, and Jade Hawk is one of the ones I enjoyed tackling the most. That enjoyment was and is tinged with some sadness, however. 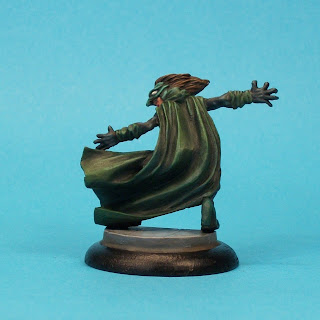 This tremendous sculpt is from the hands of the extremely talented James van Schaik, and there is a sad story attached to it. Jade Hawk was a winning entry into one of the (fairly) regular Supreme Genesis contests, and its creator was Matt Randy, a Pulp City Herald and one of the guys that had been working to help develop the game towards its eventual upcoming edition. Matt took his own life earlier this year, and in doing so left a hole in a the gaming community where he had been before that.

He will be missed.

I'd like to quote the words of Maciej Żylewicz (quoted from the Pulp City Forum):

"I just can't sit here and do nothing, so I thought you may want to remember Matt the way he was: funny, totally dedicated guy.

I loved the Jade Hawk idea - mind I read the entries blind not to get distracted by the author's name. There was only one problem - Hawk was initially male and I wanted a female character to accompany my other favorite, Skyline.

Matt, like an expert lobbyist, dropped me an email saying: you know, we reinvent her gender!

We started working on Jade Hawk, and he had a clear vision. A couple of concepts were scraped, Matt labeled them "Jade Parrot" and "Jade Owl". 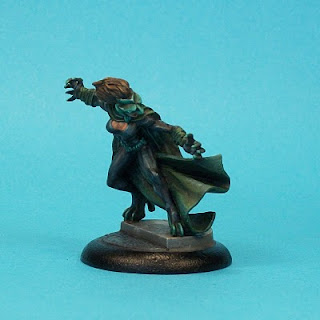 Finally, his concept got finished by Melvin and it ended up in James van Schaik's workshop. I was so happy to send the pics to Matt, he was sending me one "Where's the Jade Hawk?" email a week.

The last email I ever got and will get from Matt said:

She does look good. I can't wait to see her in pewter in my own hands.

Should have known something was bugging him because Matt I knew would send me a long list of likes and dislikes. Matt, I hope you really like her."