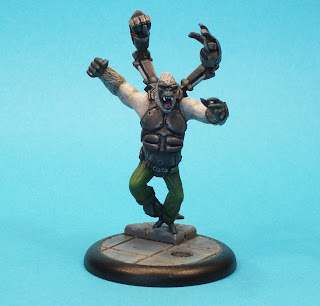 Silverager is a skilled technician, self-taught rocket science genius and a very calm individual, always the voice of reason when Guerilla's ego flies.

If you ever, ever step on his toes, he'll make sure those two extra arms are not wasting time as he will chase you down and present the ape fury in all its glory.

Finished this today, and I enjoyed painting it - quite a lot. Which is funny, because many of the models I have enjoyed painting most from the range belong to ARC, yet it isn't my favourite Sub-faction by any stretch; go figure that one out. 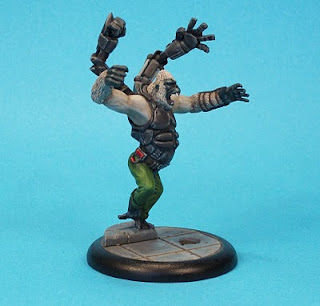 I actually started Silverager and Guerilla at the same time, blocking out areas of similar colour on the two, yet carried on with Silverager as I was caught by that ever elusive painting muse.

Silverager was sculpted by Jarek Smolka, who is probably one of the most prolific contributors to the sculpting Pulp City's Supremes, and no stranger to the ARC Team, having sculpted Apebot & Virus, and Chimp Chi amongst others. 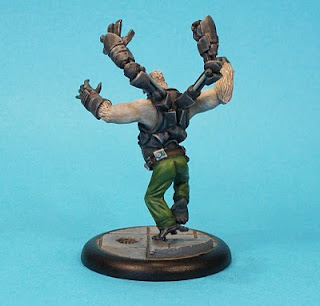 In game terms Silverager is a close combat master who can get scarier (and less controlled) as he gets more enraged. He has a pretty devastating Action in Spinebreaker (Charge* with it, sacrifice a Strike to boost it, Power-Up and voila: a result of 12 to 19 is possible), and he also has an Action that repairs Mechanical models - very useful.
Posted by pulpcitizen at 13:15