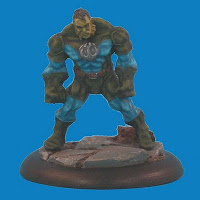 POWERS: A tough-looking model, Tritonious doesn’t offer the best Traits or Damage track, but is a good proposition in the right circumstances. His Traits are decent on the whole; they are just not as specialized as with some Level 1 Supremes. All of his Actions interact with the Water Skill, meaning he is best used against or better yet alongside Supremes and Minions (think BOOM here) with Water. His Team power works in fairly unique way to enhance his whole Team if faced with Water terrain – Water terrain is Tritonious’ friend.

TRITON’S STRIKE* offers two real benefits; firstly if Tritonious is going toe-to-toe with a Supreme, especially one prone to using Ranged Attacks, he can turn them to Water and becomes Immune to their ENERGY attack Actions! Secondly the Triton’s Strike* allows Tritonious to affect Spectral models, useful when Supremes like Ace of Wraiths, Sanguine (night) and Seabolt are proving elusive when using Spectral. Lastly don’t overlook that it does not count against the limit of combinable Actions, meaning a Charge* + Triton’s Strike* + Strike combo is perfectly permissible; and don’t forget to Power-Up or Trump Roll the Strike – especially if it is a rare opportunity to Strike against a Spectral model.

DEHYDRATE is an okay Ranged Combat Action at 2 AP, in the correct circumstances, with a bonus effect that will be rarely triggered against Supremes, due to lack of Trump Roll or Power-Up, and given that most Supremes are Incapacitated rather than Eliminated. However used against Minions (or even Citizens!) it allows Tritonious to litter the battlefield with more and more pockets of Water terrain, which in turn can boost his STRENGTH and ENERGY traits. Consider using Dehydrate on a Minion while within range of a different tempting Charge* target; Dehydrate costs 2 AP, while the Charge* + Strike (+ Triton’s Strike* if desired) will result in STRENGTH 5 +1 for Charge* plus any Trump Roll and/or Power-Up buffs, allowing a range of results from 7 to 15 – not bad for a Level 1 Supreme, and if using Triton’s Strike*, that STRENGTH boost can become self-sustaining.

TIDAL offers a couple of options. If Tritonious is working with models with the Water Skill (Seabolt; Francis Gator; BOOM Minions with Water skill!) it provides a potential massive movement boost (great for contesting or claiming objectives, as well as moving models from danger or bringing them to the area of desired conflict) for only a small AP outlay and no loss of Movement Actions. You can literally ‘flood’ an area with models (sorry for that pun…). Alternatively it also allows area and tactical denial if facing Water models: just aim them in an inconvenient direction – useful for example if Seabolt has Go With The Flow potentially lined up; or to get models away from Agenda Tokens, Agenda Areas or Agenda Buildings.

EBB FLOW* can be seen as primarily a defensive Action, providing Spectral to Water models. Extra useful if facing a Team reliant on STRENGTH Actions of course. A cheap tactic may be to build an army of BOOM Blaster Minions with the Water Skill to exploit this protection and march them where they are needed most. Alternatively, if an enemy in Base to Base has been affected by Triton’s Strike* in the current Round, then Ebb Flow means that they cannot effectively use STRENGTH or ENERGY Actions against Tritonious in the current Round.

TEAM POWER – CHILD OF THE NEPTUNE: This is basically a synergy buff for Tritonious, allowing him a boost from Water terrain or friendly Water models within close proximity, at the cost of not being able to work alongside Ulthar. In essence, try to maximize this by at least having Water allies if possible (BOOM is your friend here).

SKILLS: With only a handful of skills it looks like Tritonious is a little limited, but on closer inspection they are all pretty good. Hatred/Ulthar makes Tritonious a decent choice if you expect to face those dastardly aliens; Immune/Water is novel in that it offers broad protection without requiring Tritonious to be vulnerable to Fire. Finally Fury 1 means that Tritonious can have a chance in a stand-up fight, except where he is massively outclassed (and of course he can compensate if he is outclassed by using Triton’s Strike and Ebb Flow*; think about that option if facing the likes of Hellsmith, Giant Hadron, Apebot, Guerilla, Father Oak, Dr Mercury, Six Feet Under, Solar or other beat stick types that lack DEFENSE Trump).

RESOURCES: The usual suspects here are all worth consideration: First Aid Kit for added durability; Heroic Call (for example, use Battlefield Control to Activate Tritonious to use Tidal to position Seabolt for a run with Go With The Flow); Nature’s Boon can add a net +3 to Tritonious’ Opposed Rolls for a Round if used correctly (if you know the terrain will have a suitable feature); Path of Destiny can give a second chance on that Trumped, Powered-Up Strike just when needed.

WEAKNESSES: Tritonious’ biggest weakness is probably that he is a Level 1 Supreme – his Actions would really step-up in capability if he had the extra Damage, higher Trait scores and extra Trump Trait of a Level 2; by this I mean he looks impressive as a model, has decent Traits and Damage, yet players need to be cautious enough not to try to use him the same way they would a Level 2 Supreme. Another weakness is that to get the best out of him, Tritonious either needs to be used alongside Water models, on a Water terrain heavy battlefield, or in opposition to a number of Water Supremes. He can operate without these requirements, but is not likely to do so as efficiently as with them.

SYNERGIES: Seabolt and Francis Gator both offer excellent synergies – Tritonious gets a STRENGTH and ENERGY buff if a Water Supreme such as these is within 3 inches. The downside is that Tidal may be less desirable to use since those Supremes could be subject to moves that are not wholly satisfactory. BOOM Minions could be a cheap but effective way of offering that Team Power boost to Tritonious: use Blasters or Support Minions with Water and Target Acquired to really enhance Combat Actions, or use More Than Punching Bags and have them hang back to add to the AP Pool and maybe add to Tritonious’ Traits at the same time. In Team-building, both Dead Eye and Mysterious Man can make good use of Tritonious, so don’t overlook him when playing EL 12+ games with either.
Posted by pulpcitizen at 08:04