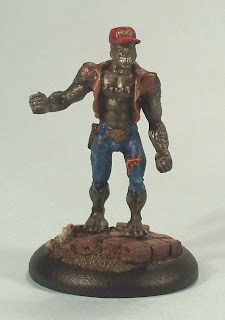 Gator is the nefarious half-man, half-reptile in the ranks of the Coven. He sticks out from the rest of the strike team, but he is so useful nobody will ever question his presence on the payroll. 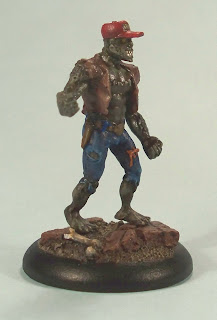 It seems as though I am posting more Villains than Heroes. Well the balance of painting is not quite so - I pretty much paint a Hero and a Villain at the same time to keep the numbers even. That said, I need to repaint a Hero and for some reason many Hero pictures haven't turned out quite as well as the Villain ones. Oh well, time and perseverence will tell. I hope. 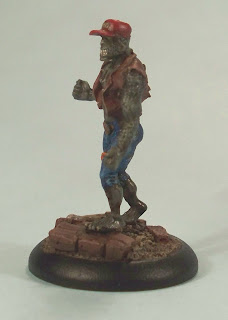 On to the mini. As ususal I had a plan in mind before starting painting. Of course things didn't work out quite right. The waist-coat originally was a 'flatter' brown which just visually looked as though it merged with the skin colour I had chosen. Not good. Hence the more orangey brown. I wanted the cap and jeans to be blue and red, and the rest to have more earthy tones (the lizard excepted), so even though it creates quite a dull effect, it was what I wanted. Still, I may do another one day to see if I can do a better job second time around.
Posted by pulpcitizen at 00:40