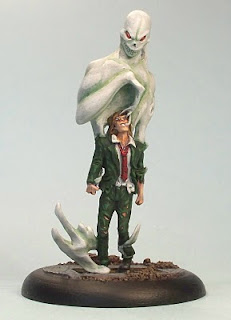 Boreas is new to Pulp City and his bloodlust and hatred of people high as never.
Fortunately for humanity, he is still weak and can’t support his material body for a long time.

I finished painting this model yesterday. Sculpted by Jarek Smolka, it was one I was looking forwards to a lot from when I first saw a preview of a painted example on the Pulp City site. What grabbed my attention most was the spectral-looking creature drifting out of the poor unfortunate host's body. In evitably that became the focus of my attention, both in painting but probably more importantly in trying to think what kind of colour palette to work with.
I settled on a very green-focused theme, from the pale greens of the creature to the suit worn by the host. I chose this theme as I associate green with ghostly stuff, and since the creature is the real focus I wanted it to have a ghostly hue. As a consequence contrast was needed, hence the red tie and red eyes of the creature, and the use of thin washes of purple on the host's skin.
In all I am a lot more satisfied with the creature than the host, but one learns as one goes I guess.
In game terms Boreas is pretty potent, a member of the villainous Forgotten, as he manipulates one of the four classical elements (air in this case), which allows him to open up some extra options in terms of actions.
Posted by pulpcitizen at 05:44