Nuke is a powerful Supreme. Despite his appearances, Nuke is not a blaster, but still has a destructive presence on the battlefield. 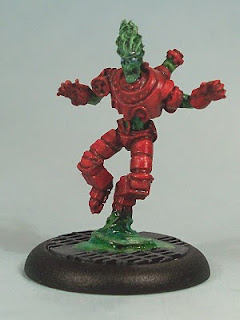 Scuplted by Jonas Deimel, Nuke is a Level 2 Villain, aligned to no particular sub-faction. I knew early on that I wanted a red-green contrast. Red because of an old comic book nuclear/atomic hero called Doctor Solar, Man of the Atom, and green because it echoed the 'official' Pulp City Nuke (plus a certain radiation enhanced behemoth from Marvel is green doesn't hurt). Colours opposed on the colour circle can work together (red-green, blue-orange, yellow-purple), by exploiting the discord created, but only if used in the 'right way'. More learned people than me can expound upon what is the 'right way', but the way I view it is that in purposefully using the discord of opposed colours, then the effect should be controlled. to that end I don't feel using multiple red with green would work, or vice versa. Thus settle on the two main colours with a cohesive plan. Variation exists in shading of course, but that works in the overall effect. 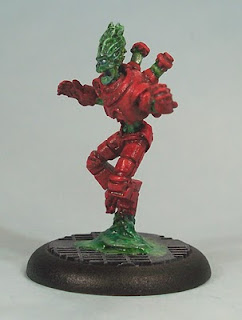 With Nuke I am not too happy with the way the skull head came out, so would like another crack at the mini. After the painting challenge of course.