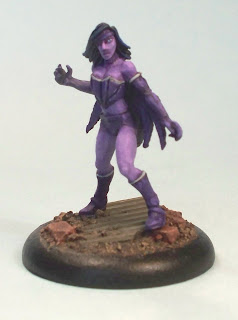 Mutant Supreme determined to exact revenge on the mysterious Sanguine. Harrier has been known to be turned by the lure of money...

Sculpted by Steve Saunders, I painted Harrier quite early on in terms of what I have been painting for Pulp City. I set out to try and do something that is seen occasionally in comics - a character with flesh and costume of different hues of the same colour (Radioactive Man from Marvel is the clasic example with light green skin and darker green costume).
Of course what works on the printed page doesn't neccessarily work as well on a small sculpture, especially as definition in a comic book is usually provided by black ink lines. I could have 'black-lined' the model, but I really don't like the appearance of black-lining - it just looks wrong to my eye. So I resorted to adding the white trim to some of the costume edges to help define the different areas of the mini, since some similarities were inevitable between the colour gradations on flesh and costume when shading and highlighting. 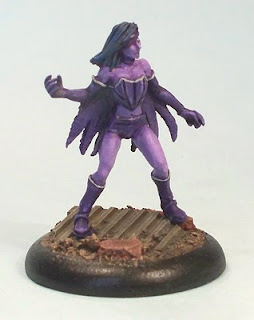 Harrier is a Hero, but since she has the Greed skill she can be included in Villain teams - at a cost. I personally feel her Greed cost is a little too high to consider using her in this way, since some Villains may be able to cover what she can offer to a limited extent, but it does open up some options to do use her in this way.
Posted by pulpcitizen at 09:39