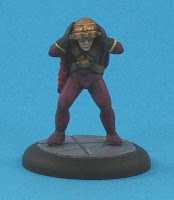 While I continue to paint my remaining Pulp City minis (Twilight was finished yesterday; Necro GI's have had some more work today; Iron Train has some shading and highlighting done; C.O.R.E. has his main base colour; only 9 models currently remaining to paint), I thought I'd post another BOOM creation, this time with two cards to represent both Hero and Villain options.

[Click on card images for larger versions]
The Mentalist is intended to be a low-level psionic. I worked him up as a Support Minion, based on a model from Black Hat's Mutants and Madmen line. The mini was painted some time ago and re-based last year to be in-keeping with my Pulp City minis - something I will likely do again for a lot of models soon. Well soon-ish. To be honest I have a mountain of minis that I would like to re-base, but tackling that goal seems very daunting as a consequence of sheer volume.

[Click on card images for larger versions]
There are are two variations of this Minion as noted, one hero and Villain. The specific difference is that Support Minions have a differing specific ability depending on Faction. The other abilities are supposed to convey a minor telekinetic shield (Shield Generator), telekinetically enhanced movement (Levitation) and ESP (Target Acquired).
Posted by pulpcitizen at 12:19