A particularly slow month, with only 3 models finished, but I am okay with that, since I have also been working on some 'other stuff'.

In addition to the minis, I completed some Tokens (objective markers etc.), which was something lacking in my array of Pulp City gaming pieces, and did some other bits and pieces. The result is that despite the month being as sparse on the minis front as my other 'worst month' (January), in this month I managed to a lot of other stuff so in all much more productive. Add to that I also put some more paint on Chronin and I am about 70-80% through painting Gentleman Sniper, then things are progressing satisfactorily. 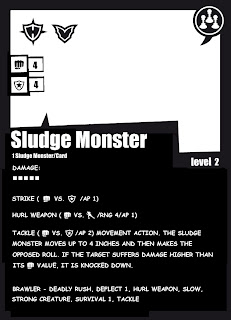 Amongst the 'other stuff' I have been engaged with, has been creating home brew cards for some of my self-created Minions, using the rules developed by Devon Peterson and others which should make it into the final book I hope, and that have been floating around the Pulp City Forums in a beta version (often referred to as the BOOM - Build Our Own Minions - rules). The cards were created with the great assistance of a member of the Pulp City Forums, and an example can be found to the right. Inspired by another forum member's past efforts, I have sourced a UK based custom playing cards supplier and created a deck of self-created Minions cards (packed out with some other useful stuff) for my personal use, which I hope will turn up soon.
Posted by pulpcitizen at 08:34