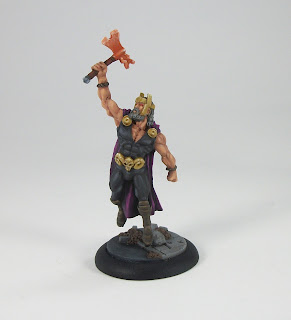 Another Supreme finished (my 140th painted Pulp City mini!), and this one has taken much longer than planned. I started painting this alt-Perun as Chernobog during the Cold war Kickstarter campaign, but then he got sidelined unfortunately. With some renewed painting resolve in July I finally managed to tackle him properly and that gives my first Supreme in readiness for the arrival of the Red Republik. Even better, the alt-card for Chernobog (which we unlocked as a special Stretch Goal during the campaign) allows him to work as a Forgotten as well, giving this mighty godling somewhat divided allegiances.

Chernobog returned to the mortal realm when he heeded a summons from the Red Republik using an imprisoned Perun. Chernobog answered the call, freeing his ‘brother’ as he arrived, while he listened to another voice, whispering he should bide his time with the Red Republik until the time was right to claim his rightful place in the Forgotten. 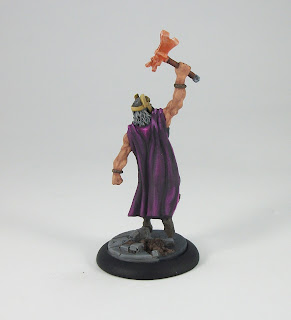 Just as Perun can be to Hero, Nature and Supreme Alliance Teams, Chernobog can be a very powerful model for Villain, Forgotten and Red Republik Teams bringing hard-hitting close combat, decent ranged attack at standard AP and an area effect ability all in one package, all backed up by bonuses from Flight and his Fire and Darkness Elements. He is vulnerable on Agility, so is ripe pickings for long-range types like Gentleman.

Painting Chernobog gets me a step closer to this year's planned goal, which I still hope to exceed. A couple more painted minis and I will match what I wanted, so hopefully I will get there sooner than later!