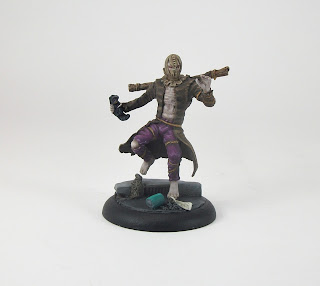 Feartigo is my second Pulp City mini of the year, making for a better start than 2016 (although I had a very good February).

I got inspired to do him when I saw someone else had painted theirs up, helping motivate me. As I had a few days off work (a lot spent assembling terrain), I felt confident I would get him finished without him falling into 'painting queue limbo', and thankfully that proved accurate. With all the browns he was going to have I thought the purple/magenta trousers would make a nice counterpoint while sticking with my colour vocabulary for Villains. 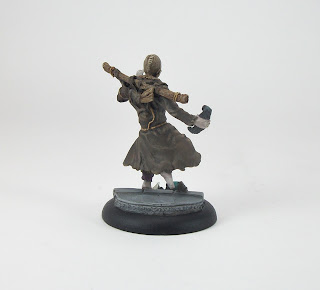 In terms of game-play, Feartigo straddles two Factions, as a Necroplane agent who has infiltrated the Coven ranks through subterfuge, secretly serving Dr. Tenebrous, but whose loyalties may be uncertain for either side. Painting him adds my first new Coven in fifteen months, and my first new Necroplane in three and half years! At least one of those Teams needs to make it to the table this year I think.

Feartigo is a Blaster with added durability, whose Actions all work against Spirit (ideal against A.R.C. or Heavy Metal). His added durablity is due to the fact that he has two defensive Trumps, adds +1 die to Defend when Attacked out of Base to Base, and because he also Damages Attackers who Damage him with Mind or Spirit Actions. Basically, as an overall package he can be a nasty surprise for an unwary opponent, especially as his main Attack will typically generate 4 dice against Living Targets.