Bring On The Big Guys! 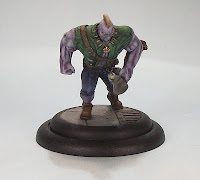 So Pulp City Supreme Edition Open Beta has been out for a couple of  weeks, and anyone checking out the rules will be aware that one of the 'big' changes (pun intended) is the application of Roles to the Supremes line-up, especially Powerhouses.

Powerhouses are the 'big guys' of the Supreme world. Within the new rules they have a pretty much unparalleled capacity to lay the smack down on whatever gets in their way.

Powerhouses are now generally to be mounted on 50mm bases; players retain the option to keep them on 40mm bases, but base size has added meaning in Pulp City now. However, those 50mm bases can provide a real advantage as in the new system the Opposed Roll has been replaced by the Action Roll. 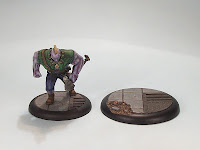 The Action Roll provides a success of fail mechanism and extra degrees of success all in one. Powerhouses benefit in a couple of ways. Firstly they score extra successes (SFX) easier than all other Roles. Secondly, because Size Matters (this is a Combat Bonus) their bigger bases mean that if using their Actions against models on smaller bases means they get an extra die for that, and die pooling is a key feature of the Supreme Edition rules. Players should start to get into the swing of maximising their dice pooling, and Powerhouses are definitely at the forefront of that. 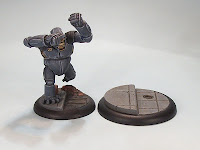 While we have been play-testing over the past year or so, I had mounted my own Powerhouses on 50mm bases under their regular bases as a useful prompt that they would get the Size Matters Combat Bonus (see the top picture).

However I recently decided i needed to make the upgrade permanent, so I have painted up a set of new bases with which I plan to remount the 3 50mm base Powerhouses (Six Feet Under; Father Oak; and Apebot); Giant Hadron is a special case who at 80mm base is the 'big guy of big guys'.

Now I am just hoping that the good old super glue bond is not too good; why is it whenever you want something to be loose with super glue it is stuck tighter than anything, while models you want to last fall apart with a mere sideways glance? 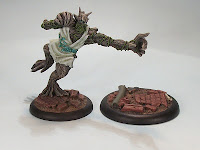