The earthly avatars of the great Ape Spirit, Primates of Power are primal beings who are inextricably linked with the fate of the Ape Revolutionary Committee.

The Primate of Nature is attuned to Supremes such as Guerilla, those particularly aligned to nature's fury.

In Pulp City SE terms, the Primate of Nature is an unusual deviation from the usual Leader type; normally they are a Level 3 character, yet for the A.R.C. we decided that the Leaders would be the Primates of Power, who in turn can boost the capabilities of key Supremes.

What you end up with in regards to the Primate of Nature is a tough little monkey who can buff one model, or a whole A.R.C. Team depending on which Action he uses, as well as packing some punch himself. 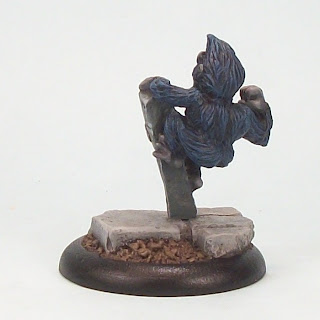 The Primates of Power are due for imminent release, along with Red Bella. I decided to get mine painted as I was worried about losing the momentum for painting I had built over the first few months of the year; I needed to 'get something finished' which is how I have resisted or overcome previous painting slumps, as regular readers may recognise.

So I set out to start the Primate of Nature with a quick paint-job, and after about and hour or so work (not non-stop, but around bits and pieces of other painting), the mini was done. For such a quick-to-finish piece, I am happy with the outcome. It is just as I want it and has some semblance of momentum restored for me. This is the 35th mini I have finished this year (after painting only 24 in all of 2012), so if I am to hit my target of 48-50-plus minis for 2013, I felt I could not risk a new painting slump, and this was the perfect mini at the perfect time. Especially with the upcoming Minion Month Painting Challenge.... 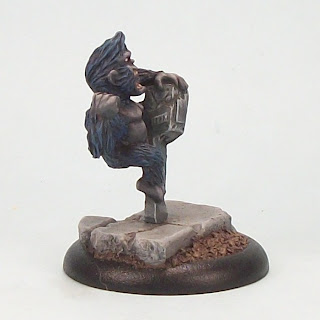 The Primate of Nature is my 109th discrete Pulp City miniature including individual Supremes and Minions and duplicates. I would like to add at least four more this month, maybe as many as ten. How I get on with that is another matter...

Anyhoo, watch this space!
Posted by pulpcitizen at 14:21