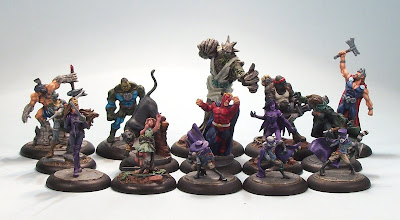 The power of primal Nature unleashed in a Team of Heroes led by Dark Solar - the ultimate iteration of Solar/Avatar of the Jaguar.

Although I have listed this as a Sub-Faction (as with the Dead Eye team), it isn't strictly a Sub-Faction, but with Dark Solar in charge shares enough commonalities with a Sub-Faction themed Team that it is simply more convenient to list it as such.

As things stand, this can currently be an EL 21 Team - no mean feat.