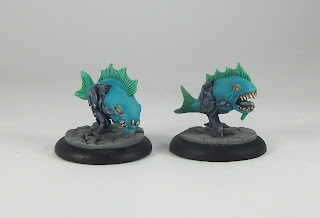 Ankle Biters done! I tackled these now as I was starting to lose some motivation and momentum on the Citizens, so I needed to finish something different to keep myself going. Thankfully the Ankle Biters offered a pretty quick turnaround. On another plus side, painting them is in line with my intention to paint more Minions this year.

I kept the painting scheme pretty simple as the most important thing for me was simply finishing 'something'. That helped them get finished fairly quickly and my renewed motivation has extended to prepping some more minis (Including Voicelings!), which was a nice bonus. These two are my 146th and 147th painted Pulp City minis, taking me a step closer to the 'magic 150'. 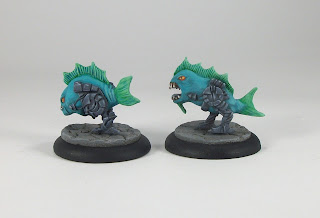 Ankle Biters have been appearing in increasing numbers on the streets of Pulp City, and many assume Mysterious Man is responsible for their creation, but rumour has it that he now has a rival in his field.

In game terms Ankle Biters are nice simple Level 1 Brawler Minions. They are best used in tandem, ganging up on a single opposing model, preferably with added Momentum bonus (they can each roll 3 to 4 dice then if attacking the same model). If you can trigger an EFX, they become especially dangerous as one of their EFX options is Fatigue, meaning these lowly Minions can potentially lock even a mighty Supreme in place. 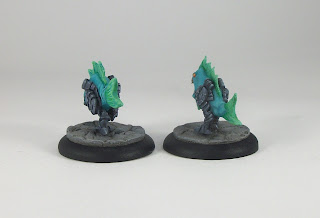 I really need to get a Minion-heavy Mysterious Man Team onto the table soon to use all the wacky options at his disposal!