New in store this week are a new sculpt for Androida and the Supreme Genesis character called Dr. Warlock. We are really happy to finally resume what will be regular releases for the range, starting with these two great Supremes.

First up is Androida (new) – an updated version of the classic Supreme Hero. Androida was one of the first models sculpted for the Pulp City range, and we are very pleased to be able to give her a new sculpt. Coupled with her new sculpt, Androida's storyline continues to evolve, and the new mini comes with upgraded rules making her a Level 2 Supreme and the first character with the new Field Commander Power (think Leader-lite). 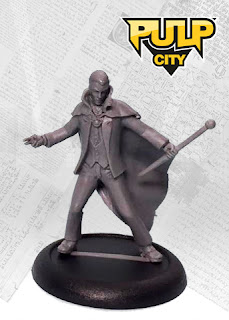 Dr. Warlock joins Androida as the second of our new releases this month. Dr. Warlock is one of the Supreme Genesis characters which were created thanks to our first Kickstarter. Thought-up by the inimitable Drew Wood, this incarnation of his character has inherited mysterious power which he is using to protect Pulp City in its time of need.
Posted by pulpcitizen at 12:13