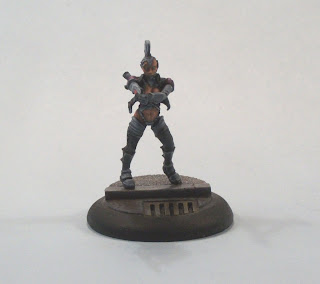 If Cyburn has a PHD in trouble seeking, that would surely make her more in line with the rest of the big brains on the team. She doesn't. She is a natural warmonger, and that dates back to the times she was just a 100% flesh teenager. Her abilities to cause trouble had been significantly raised with all those shiny new things.
Her service in Heavy Metal is more to her liking than serving her time in jail, but once the 5 year contract is done, who knows where Cyburn will sign up? 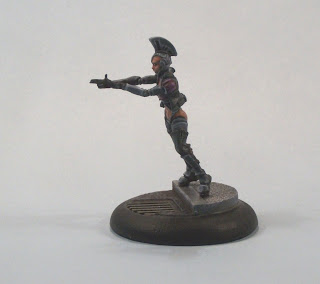 Lady Cyburn was added to the ranks of Heavy Metal along with Captain Hadron, and was a mini I liked straight from the off (due to its recognisable influence from WildCATS' Ladytron), but after putting a couple of colours on the mini it joined the back of my WiP queue.

It wasn't until I painted C.O.R.E. in fairly short order that I thought to make a slight change to how I was doing the metallic surfaces and so the rest of the mini followed fairly quickly thereafter. please forgive the photographs - not my best as they came out pretty dark. I like to think the mini looks better up close than it does in these photographs, and I was pretty happy with the way the flesh tones turned out, which may not be too apparent from these images. 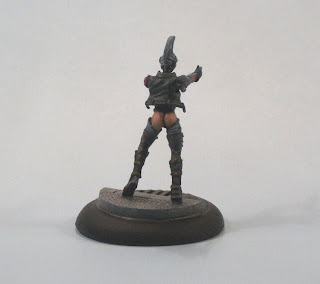 In game terms Lady Cyburn is very much a 'blaster', and so adds flexibility to Heavy metal since many of the Team are brawler or brawler-support types.
Posted by pulpcitizen at 09:23