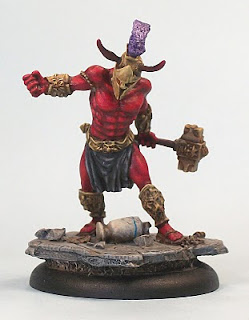 Hellsmith is the minor Greek deity of forges, his true name long lost in the sands of time.

Sculpted by Edgar Skomorowski (Degra Miniatures), this is actually the second Hellsmith I started, but the first (and so far only) one I finished. The other version is painted in more 'human' skin tones. When the alternative version is finally done, I will try to remember to post images of that one also. Despite this version being finished with an aim to quick completion, I am pretty pleased with the results. 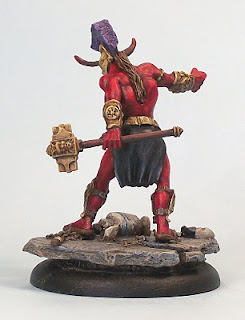 This was a nice quick mini to get painted, especially as I had stalled on the other version. I do find it satisfying to get minis completed, not least due to painting challenge I have set myself.

The model was completed along with several others in February, but camera issues (as you may have read about in other posts) have prevented me from taking any pictures of models until today.

In game terms a big, bad bruising villain. Brutal and effective - so therefore fun to play with!
Posted by pulpcitizen at 09:26