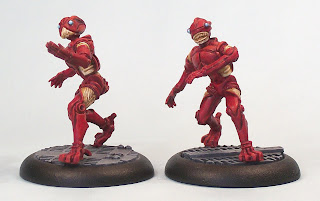 After the first Ulthar invasion in the early 70s, inquisitive minds in Pulp City embarked on a project of fighting Ulthar fire with fire! The first of the reprogrammed bots fought alongside Nuke in a short and violent battle in a radioactive waste dump in Mexico.

Sculpted by Jarek Smolka the Sentry Bots are a universal Minion resource. Intended to be very 'pulp sci-fi' in their depiction and styling, I think they look just the job. A few options are available in terms of heads arms, and backpack to make the Advanced Sentry Bot version. 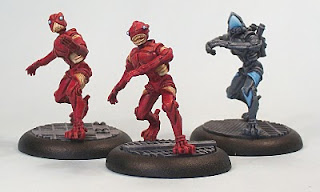 No guesses as to what the source of my colour scheme inspiration was. That however isn't the full story. A fellow Pulp City hobbyist (Undead Jon) painted Rook in a manner inspired by Iron Man also, and I thought his idea was so good that I should...ahem...borrow it. Well imitation is the sincerest form of flattery, isn't it?

The second picture contains the Sentry Bots with the Advanced Sentry Bot I also completed last month.
Posted by pulpcitizen at 09:54