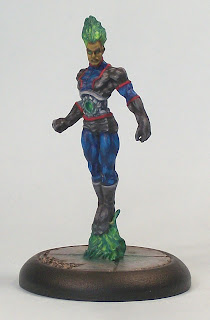 Once upon a time, in the darkest alleys of Newport, two brothers led the sinful life of crime and terror. Such were their feats that the watching eye of the Mysterious Man turned their way and he nominated them the ambassadors of his evil empire in Pulp City. The goons became his trusted lieutenants, but when Heavy Metal invaded Kodo Island, the kingpin didn't hesitate and unleashed the brothers, side by side with his monstrous creations. The rampaging dinosaur, tore the goons to pieces before the might of C.O.R.E. stopped him. One of the brothers was beyond help, but the other still lived, and the heroes retrieved him from the island. To sustain his life, his body was rebuilt upon the small atomic reactor, the nuclear heart. Thus Nuclear Jones was born, half-man, half-machine, with a debt of returned life to be paid off. 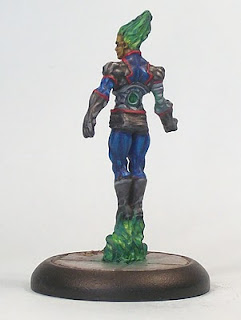 Sculpted by James van Schaik, Nuclear Jones is the heroic antithesis of Nuke. On opposing sides, neither is really able to harm the other so they can cancel each other out, yet both are very dangerous in their own right.

I really enjoy James van Schaik's sculpting, and this mini is no exception. I am glad he has more upcoming Pulp City projects (Kitty Cheshire for example), and with minis such as Nuclear Jones it is increasingly possible to aim for a more 'spandex-y' looking team. One of the great things about the range is the eclectic nature, so much so that various themes are available to hobbyists.

I may re-photograph this model at some point as the lighting makes it appear darker than I would like, but that said I was fairly pleased with the painting, particularly on the NMM (Non Metallic Metallics) parts of the mini, as well as the OSL (Object Source Lighting). I have not yet perfected either technique, but I hope I am improving.
Posted by pulpcitizen at 11:29