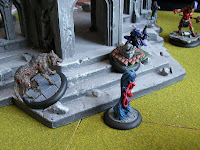 Rob and I managed two games of Pulp City today; the first was a small Encounter (EL 5) built around a special scenario - a variation of the Quest Plot. The game was fast and fun, and involved some new terrain pieces I have acquired to represent the ruins of Ashville Asylum. This game will get a more full write-up soon as I formulate the scenario outline as a pdf. In the picture (right) you can see Red Riding Hoodoo's Zombie Wolf racing to intercept the advancing Villains (Twilight; Hellsmith; Sanguine). 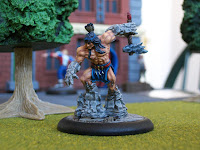 The second game was a bigger Encounter. This time we played EL 12 and C.O.R.E. and members of Heavy Metal took to the streets of Pulp City to remind a group of disparate Vigilantes led by Dead Eye that they are operating outside the law. With EL 12 games being much more involved due to the array of Actions and abilities employed, we played a simple Smackdown! Plot. Rob won decisively in command of the Heavy Metal Supremes (C.O.R.E., Dr. Mercury, Iron Train, Nuclear Jones, Androida, Chronin and Lady Cyburn) against the unaligned Vigilantes (Dead Eye, Stoner Hawk, Virgo, Solar, Tritonious, Jade Hawk and Skyline). I made some poor tactical choices and folded quickly against the heavy Metal onslaught. I look forwards to a rematch against C.O.R.E. and company, maybe when Dark Solar is unleashed....
Posted by pulpcitizen at 11:46