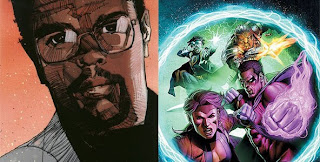 Dwayne McDuffie passed away a few days ago, I learned today. He was one of the architects responsible for one of the comic book lines/universes that I cherish most - Milestone; home of Static, Icon, Rocket, the Blood Syndicate, Xombi, Hardware, the Shadow Cabinet and so many more besides. His name is probably not readily familiar to many, but his impact certainly went far beyond those Milestone comic books, or the work he did for DC and Marvel comics amongst others. Dwayne McDuffie also worked as a writer, story-editor and/or producer variously on the Static Shock, Justice League/Justice League Unlimited, Teen Titans and Ben 10 cartoons.

Dwayne was a regular presence on the forums he maintained, and was responsible for printing my only letter to a comic book letter column. He was always courteous and open with his opinions which were fair and erudite in my view. I feel he never got the recognition he deserved from DC or Marvel, but that is for another time. More than the passing of other creators, for me Dwayne McDuffie's unexpected death at the age of 49 years is a sad event.

Rest in peace Dwayne McDuffie. Your talents will be missed.
Posted by pulpcitizen at 08:02