This is the second update of Work In Progress on the Hadrons; as you can see I am slapping on the colours on all 3 together in order to try and preserve some uniformity as I go. The highlighting and shading will likely see differences, especially in amount applied and levels of contrast, but the basic colours are blocked out for now. 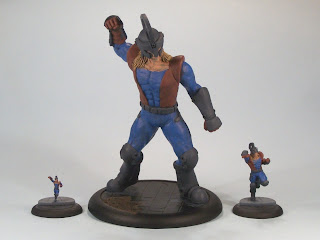 Giant Hadron offers some really big surface areas, so my base coat brush has been used predominantly on him. Compared to some of the 'big' Pulp City models on 40mm bases, he is not over-detailed, meaning the greatest challenge will be in achieving satisfactory highlighting and shading on a much bigger mini than I am used to painting. 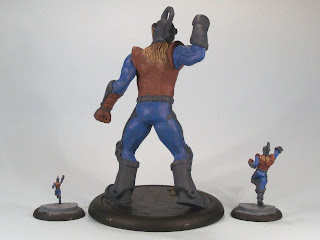 As for the colour scheme? Well 3 of my favourite characters over the years have been Giant Man/Ant-Man/Goliath/Hank Pym, Colossal Boy (Legion of Superheroes; in his Dave Cockrum and Giffen and Lightle era outfits) and Atlas (from Thunderbolts). What all 3 have in common is that they have red and blue (or blue and red) costumes. add to that that I have chosen red and blue for my Hero palette theme, and it was a no-brainer to look to continue that.
Posted by pulpcitizen at 07:20