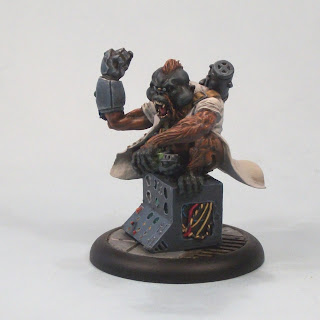 Some beings are born to be leaders. The problem of Ape Revolution Committee is they have a few too many alphas in their ranks.

When Channel 4 mentions the bravado actions of A.R.C., Guerilla is usually the one mentioned. But only a few outsiders are aware that most of the progress made by the primates in the last years was sparked by the twisted mind of the alpha orangutan, the self proclaimed Dr. Red. Although his first attempt to take over the group while still in the space ended up with Guerilla beating him to a bloody pulp, Red mastered the art of patience. 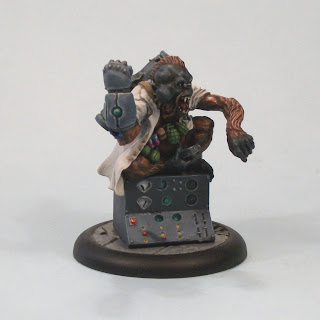 Took a long time this one, it really did. Base colours were splashed about with hairy stick abandon when I was gripped with some great momentum, and as is always the way with momentum, it petered out...

Work on Dr. Red started many months ago, when I saw a short-lived resurgence of focus, and then he essentially got pushed further down the painting queue, generally in favour if some minis that were simple, or perceived to be simpler, to paint. I finally knuckled down slowly over the past week or so to occasionally dab some acrylics to the thing, and I have to say I am moderately pleased with how he turned out. Yes his power glove device could have benefited from a free-hand red star or some such, but lacking the confidence to pull of a weathered look to such an option as I would choose, I instead shied away from doing so. There are some parts that have or will be touched up a bit further before varnishing. 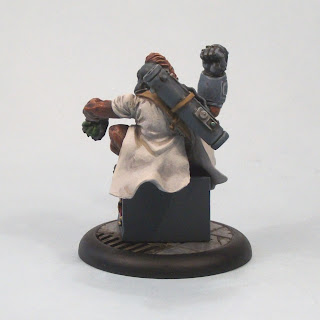 Dr. Red offers some useful Team-building options: Tactician 1 (adding AP) and a couple of Actions specifically intended to aid or buff other ARC members, and his Team Power can also offer help. He offers some ranged attack options with Throw Then Think, and Weapons Crate - if taking this Resource, seriously consider also taking Guerilla, Howler and/or Gentleman (with an ARC majority) to maximise benefits. Lastly, he can even stand up to moderate close combat attacks fairly well, so he is a good all-rounder.
Posted by pulpcitizen at 04:01