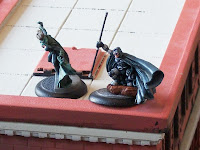 [Note that all pictures are from the second Encounter]

In the first game, Rob and I trialled the encounter for Salute 2011 (London Calling!); doing so has highlighted a couple of necessary tweaks to consider as a demo game. Rob looked to have taken the game in Round 1, before I ripped apart his Team in rounds 2 and 3, and he just nicked the win in the final Round. The demo Encounter is built around Agenda Point (AGP) victory conditions, so even though Rob lost a few minis quite quickly, he still managed to snag the narrowest of wins (which I could have turned to a draw if I paid a bit more attention). No pics form this one - all today's pictures were from the second game. 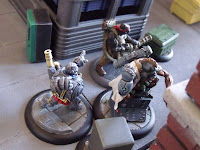 The second Encounter was a Take & Hold game, played using both victory conditions. I tried out my new team concept: ARC 'fire base' (Dr. Red, Guerilla, Howler and Gentleman). Rob took a more balanced Team (Solar, Iron Train, Skyline and Jade Hawk). And it was there that the game was probably won. My minis ended up too closely packed to really use the Weapons Crate as I planned, which just goes to show that extreme builds are very game/scenario-specific (this one might work well for an Intercepting player using the Escape Plot, for example). The game was over within 3 rounds or thereabouts - a comprehensive victory for Rob. On the plus side, I had lots of fun lobbing bombs (Throw Then Think Action) and exploding munitions (Detonate) with Dr. Red, so much so that I can't wait to use a more balanced ARC Team in the future.
Posted by pulpcitizen at 09:50