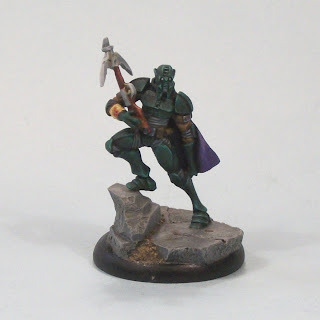 Master Caste - Sagittarius: Master scouts and infiltrators who land first on any planet and prepare the invasion.

The only Pulp City mini I painted in February, Xyllian, Master Sagittarius (by Israel Gonzalez Mojarro) is the last of the first wave of Ulthar that I had to paint. I started out with a clear mind of what I wanted to try to do, alas in execution my skills were not on par with my goals.

While I am reasonably satisfied with the outcome, it isn't how I envisaged the model looking. My original plan had been to to a near-black armour effect with green highlighting on the sharp armour edges, after seeing a similar approach on some of the recent GW Dark Eldar. As I was painting it though, I couldn't achieve an effect that looked consistent across the armour areas as well as being sufficiently satisfying to look at. Therefore I just went for the mid to dark green armour. The purple cape is intended to help tie the mini in to the rest of the Ulthar, and that actually came out as the most satisfactory part of the paint job. There will be a group Ulthar shot soon. Xyllian, Master Sagittarius brings some decent ranged Actions, and his Exclusive Resource (shared with Virgo) boosts these further. Basically he is part sniper/fire base model, and part Team support through his Gate skill Analyze Action (which does benefit from the Sagittarius Crossbow - meaning multiple targets could be affected, or a model slowed down while using Analyze). Add in decent defensive Traits (although lacking any defensive Trumps), and Xyllian is a decent proposition who can even hold up in close combat to a limited extent.
Posted by pulpcitizen at 10:05