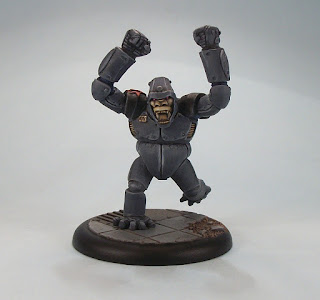 I had planned to re-base my Powerhouses (Powerhouses are the 'big guys' of Supreme Teams in the upcoming Pulp City SE; in comic book terms they are the Hulk or the Thing of their Team), but had not planned that work yet. I had the bases ready but wanted to get back on top of my general painting first.

Then I knocked Apebot of his shelf in the figure cabinet and so with so much re-touching of chipped paintwork there was only the choice to re-base at the same time.

Easier said than done of course, as I found the arms did not want to go back on as they had fit before. And of course I forgot precisely which colours I had originally used...but made some guesses to compensate!

Anyway no mounted on a 50mm base is Apebot.

Base size is important in Pulp City SE as Size Matters; basically the model on a bigger base gets a die bonus against models on a smaller base. And trust me, those dice do matter!