The Green Emperor twisted his broken sword in the chest of the Phoenix and the fire died in her eyes. Indeed, the times had truly changed. He turned around looking for the Tiger, but she was nowhere to be found. It mattered not, for they were writing a completely new history this time.

Okay, this was a pleasant surprise to myself - started last Saturday and finished within a few days, which does not follow my usual pattern M.O.; that usually means starting a model, blocking stuff out and moving only to return weeks, months, or even occasionally years later...

So Green Emperor is done. I purposefully used a very limited palette: 5 base colours including 3 greens, each highlight in a different way; blue-green (sword), with some thin glazes; and dark grey for the hair.

While not my best work, I am happy with how it turned out, especially given the time I took for turnaround - it has helped stoke my enthusiasm more, so much so that I am determined to finish my 3 Terror Cotta Warriors and maybe my Shadow Double this month.

Green Emperor's game rules for the current edition have been released (here), but suffice to say he comes with the usual plethora of rules that one expects for a Level 3, and one of the cool things is he unlocks the feature to allow up to 3 Terror Cotta Warriors to be taken in a Jade Cult Team. 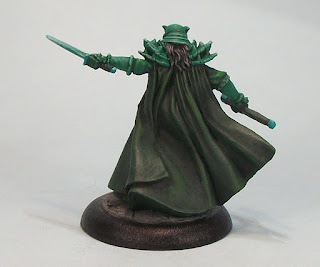 However, in the upcoming SE I think he comes into his own; Actions that required a lot of text have been translated into our new Action Bar approach. In addition, we have taken a more comprehensive view when revising everything to hopefully make everything have its own relative worth. Well for me Green Emperor will offer not only a Leader, but a very capable front-line combatant, with the opportunity to unleash truly overwhelming attacks in the right circumstances and with the right choices; those choices mean accepting he cannot do as much as could otherwise, but offers him a brutal way of influencing the battle directly.

Anyway, enough words, I hope to post something else quite soon so watch this space.
Posted by pulpcitizen at 23:39