Night Fright gently eased Leech into a turn towards the primary portal. They were both ready to feast on the horrors in the souls of any unfortunates whose paths crossed their own. Yet somewhere deep down, Night Fright could not escape the feeling he had experienced something very much like this once before.

As ever, this has taken a while to finish!

I finally got around to assembling the mini in January (see here for the WiP) when I worked out how I wanted to manage to lift the model up. I did not want to use a transparent strut, and I did not want it to be attached by an object, since more often than not neither is too satisfactory a solution for my liking. I have seen some flying/leaping models lately supported by capes and trailing cloth, and that gave me inspiration when I saw some smoke effects from Tabletop Art. 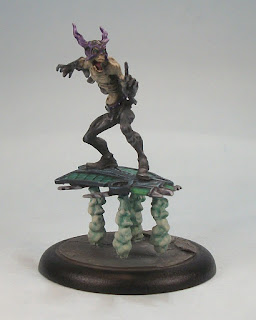 And like any plan, and as any regular reader of this blog know, my painting plans rarely survive contact with the enemy; the enemy in this case being my ever-fleeting motivation.

Well motivation returned in the past few weeks and it is finally complete. I am pretty pleased with the outcome and think that this very cool sculpt by Paul Muller will both fit in with and stand out from my Necroplane and wider collection of Villains.

In a nutshell, Night Fright is some kind of unliving remnant, possibly from outside the Necroplane, and he rides atop Leech, the wildest of the Nightmare Engines.

In the upcoming Pulp City SE, Night Fright & Leech is a Level 2 Speeder. Speeders can use more Movement Actions than other Roles. they are much, much faster as a consequence, but generally less hard-hitting. Except when it comes to Night Fright & Leech. This Nonliving partnership has one of the most powerful Overrun Actions in the new rules; an Action Type that allows a model to crash through a number of Targets at once. Arguably the only better Overrun may be Seabolt's, but that should be clear when the new rules are formally unleashed. 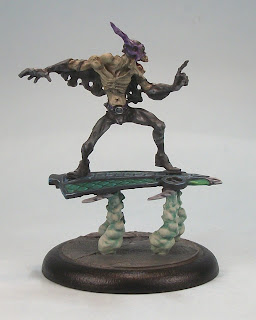 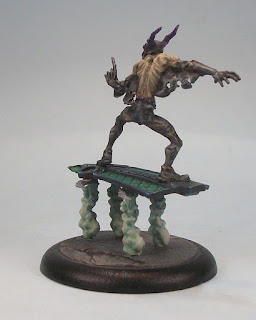 For my Necroplane, currently I have Doom Train and the soon to be released Papa Zombie and Comte Vendredi to complete. There are a few other Pulp City minis I have yet to finish so hopefully soon I will have more done to show off. The horror-themed Necroplane could be a cool choice for this year's Hallowe'en Madness, so I must get chatting to Rob about that very soon. 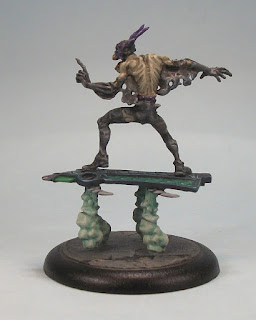