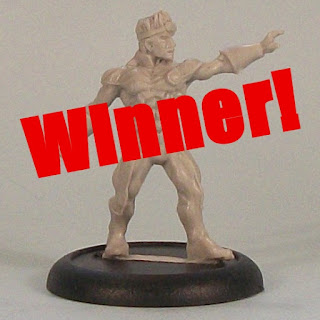 Okay, contest 2 was to design Pulp City stats for Doc Cosmos. I had two entries and a multiple point rating system...and inevitably both came out about even. The tie-breaker for me was the Exclusive Actions that captured the theme of Doc Cosmos, so the winner is...

...Skywatcher! Not quite as I would have statted him, but the winner nonetheless. Thanks for entering guys. And the winning entry:

Cosmic Beam (BL6 / ENG / RNG 8 / AP2) Channels interstellar energy into a blast from above against target and anyone within 2 inches.

Star Flash (SBL5 / MND VS SPT / AP2) A burst of light and energy disorients all enemies. All enemy models caught in blast must make an opposed roll.

Team Power Celestial Bond: Friendly models within 4 inches of Doc Cosmos benefit from a +1 on opposed rolls
Posted by pulpcitizen at 12:05