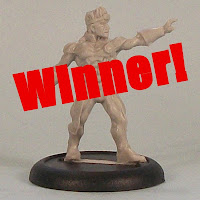 Contest 3 was to write a brief story for a character fitting this mini who is not Doc Cosmos. I had 3 entries and a clear winner among them.

And the winner is...

His story was about a hero called Parity.
The entity known as Parity is still a mystery among the superhuman community as he claims his origins are from beyond the realm of the physical and that he is the essence of all things in the universe or to be more specific Earth itself as his focal point. Some could call him a reluctant hero or villain captured by the hap stance of fate itself.

Some time ago, that very balance was threatened with the surge of superhuman beings and their various agendas upon the simple life of everyday citizens of the world. Parity claims to be the most recent host of many and was chosen by some means that even he does not understand and is perhaps the most public of any incarnation known with powers shaped by the personality of those that was given the power to wield. John Patterson was once his name, a lawyer with a small law firm known as Johnson and Powers until the one day on his way home from work a strange green glow appeared behind him and called his name, it told him he had been chosen. He felt no fear, just peace as the light enveloped him and he disappeared. It was several days later that he first appeared again in full costume and adapted to his new powers helping to thwart an attempt to steal top secret nuclear material that could have been turned into weapons of mass destruction. Nobody really missed the man known as John Patterson, a man that grew up in a foster home, never knew his birth parents and was consumed with his work so much that he had little time to consider for friends and family. Yet now, people have taken notice of the being known as Parity.

He only appears where he is needed and aids those that need his assistance to maintain the balance in all things. A paradox in some respects as he is neither good nor evil and only really seeks to maintain the stability of our reality from falling too far into the realm or Order or Chaos.


Thanks to styx, skywatcher and Doctor Warlock, and everyone who entered. Minis will be en route soon.