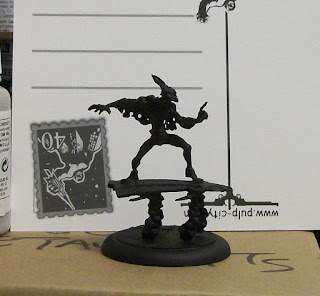 These have been in my 'to do' pile for quite some time. What held me back for a few months was figuring out how I wanted the sky-board (Leech) to 'fly'; well that was resolved when I saw some smoke style special effects on Tabletop Art's site. I ordered a couple of packs and problem one solved.

Problem two as ever is my project inertia; this can hit at any stage of a project and kicked in before assembly began. Well, it has now resolved - getting six minis painted in December and three (so far) in January created some momentum and so yesterday I assembled this thing and gave it a spray under-coat.

Watch this space for completion (sooner than later I hope!).
Posted by pulpcitizen at 04:38