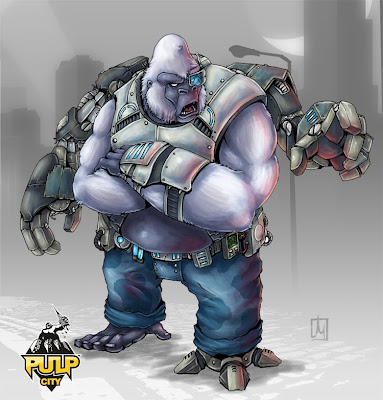 
Pulp Citizen: Hi Melvin; this is your first interview I believe? (If so I will try to be ‘gentle’).
Melvin de Voor: Hi Leon, yes, this is my first.

PC: Okay, can we start by talking about how you came to be working with Maciej and Pulp Monsters?
MdV: (I have to be careful not to get too long winded.) First I heard of Pulp City was at the old Confrontation forums; Maciej had a nice teaser of Guerilla and a *contact me if you want to learn more* signature. But the first contact that spawned us working together was at a Spiel Essen convention; Pulp City was still at its infancy but the preview miniatures of the initial ARC members made me fall in love immediately. We spoke about it, I sent in some samples, and that is how it all began in a nutshell. So blame the Ape Revolution Committee for that!

PC: Those communist Apes are responsible for a lot, aren't they?
MdV: Unofficially definitely, officially they are just "fiction", it’s all part of the master plan mind you.

PC: Can you outline your role in relation to the Pulp City game?
MdV: Not the easiest question, good start there.
I do a lot of concept art and illustration work for Pulp City based on concepts by the Pulp City development team; mostly when it’s the whimsical and the wicked I get the call.
But regularly I also bring in my own Supreme designs to the table like Vector, Night Fright and the Otherside Subfaction.
Besides that I also take care of a lot of graphic design elements, as well as the layout and DTP work of the Pulp City rulebook, and also general feedback and thoughts, and well, probably if this wasn’t an international feature, I’d make some lunch every now and then. 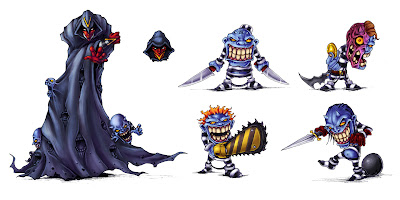 PC: Sorry for not going easy there! So your role is very diverse from the beginning (conceptual work) to the end (design/layout). How do you find that kind of lengthy process?
MdV: Sometimes it means I have to switch between different mind-modes, as my work is very dependent on my state of mind, so that sometimes is tough, but on the other hand the variation is great.
A lot of things I did for Pulp city were the first time I ever did those (for example, the rulebook work.), so in the end it’s also a learning process.

PC: Can you remember what was the first piece of art or design you created for Pulp City?
MdV: Yes, that would be Dr. Red - he will always have a special place there (that damn ARC again isn’t it).

PC: Can you talk us through the creative process you have for designing a new character concept? What stages does the process go through?
MdV: It depends whether it’s a *commissioned* or *proposed* design.
With commissioned designs I get a small brief; based on that I make initial drafts and sketches (though, I often forget to do that and go straight to the final outlines). After which, with feedback, I turn it into a finished inked line art piece; when that part is agreed I turn to digital coloring to finish it up.
Proposed pieces often start with me swamping Maciej with a dozen scribbles and drafts and afterthoughts behind them…and sometimes one of them can follow up in the same process as commissioned pieces.

PC: Do you ever get any kind of ‘artists block or ‘concept block’ when tackling a new project?
MdV: Yes, I actually had those a lot last year, but almost every project I tackle has at least a minor artist block; although it’s mostly about me being critical or picky on my own ideas or art all the time. More often I have communication blocks while working in full creative-mode though, resulting in me swamping Maciej with a lot of stuff at once. During these periods I sometimes forget what day it is even.

PC: Do you have a piece of Pulp City artwork or design that you are most proud of?
MdV: That’s a difficult one, due to the diversity of what I do... I’m very proud of the rulebook. It was a struggle, I literally pulled hairs from my head…but when the book came in I felt like I just held my firstborn child in my hands.
Night Fright I’m also proud of - it’s my favorite Pulp City concept.
And Red Bella deserves a mention too as I’m still amazed it actually worked out (an ape, with subtle comic book female sex appeal…its trickier than it sounds!).

PC: The Red Bella Piece did work very well indeed, and as a fan I love Night Fright and Leech. Moving on; as well as a contributor to the game, I am a fan, and even so I don’t know everything going on. We see stuff like ‘Infeartigo’ (p. 50 of the Guide) – is it weird to develop stuff that may take a long time to be created as a miniature?
MdV: Maciej does a tricky job on that; nobody but him knows all what is going on, and [I’m] partly thankful for that too…as a fan, you like surprises every now and then.
To be honest, for me it’s just the icing on the cake to finally see the miniature fleshed out. Most of the time I draw the characters because I want to draw them, knowing they can get a place in the rulebook at the very least.
But yeah, sometimes I get very anxious to see some of the longer standing concepts in the flesh (looking at Bad Alice especially), but sometimes, like with Night Fright, the process is very fast actually, as he got priority over Deadliner (and Feartigo).
The problem is that there are so many ideas between the entire development team, and only so many that can be realized.

PC: True enough about so many ideas and only so many resources. Looking at your Deviantart page, I see Captain Flash – was he an early version of Sovereign by any chance as I can see some thematic similarities?
MdV: I had to take a peek at him again [the art is from 2010 – PC], but no, completely unrelated. Captain Flash was commissioned as a steampunk miniature for Moonfleet Miniatures based on a classic British hero (I think?) [Flashman? - PC]. I think it was never made, definitely never released (as is sadly the case with a lot of my work for them…this being a tough business for small companies). In fact I did not create the Sovereign concept (though I made the drawing for the card based on the miniature.)
But I can see how you got that idea...I think the afterthought is the same - an all-British pulpy hero type character.

PC: Gotcha. Pulp City is a very visual game, even down to the character cards – there are lots of icons in use there. Did you design those or were they in place before you came aboard?
MdV: I’m currently designing additional icons for **removed by the Pulp City department of censorship and intelligence **
However, the current card icons were already there when I came aboard.

PC: I see the censors hit us there! Changing tack - Do you have any favorite artists in the gaming world? Or outside of it?
MdV: I’m actually not that well versed in comic books, most of it I started to do research on after I started working with Pulp Monsters, and there are some artists I like that have become inspiring to me, but I have to shamefully admit their names escape me right now. Design and idea wise my main inspirations actually come from 80s and 90s cartoons, you know, back when cartoons were allowed to be epic! C.O.P.S, TMNT, Bionic Six, to name a few.
And Batman; I always love Batman, but more so his enemies.

The only comic books I had regularly bought (and count as inspirations) are Spawn, the Darkness and some of the Aspen [Comics] line-up.
Within the gaming world, Paul Bonner has had a huge influence on me as did Eduiard Guiton...the art of both fellas actually drew me to the gaming world

PC: On the gaming front, as a conceptual artist, when you see a 3 dimensional model of one of your 2 dimensional drawings, does that influence or affect the way you work or approach new concepts?
MdV: Yes, even before Pulp City I had longstanding concept art relations with Impact miniatures, and that proved to be educational. With a concept I regularly take into account the casting of the miniature; for for example were the miniature would be cut in two, then it’s better to add a design element in that position that could mask the cut.
Also, most of my concepts are straight-up front as opposed to exciting extreme perspective camera angles, since that is much clearer for the sculptor to work from…eventually, all these things just became part of my style... I wonder if your blog readers even want to read this much - I can never say things short.

PC: I am sure they do. Do you paint miniatures or play skirmish games yourself? And what miniatures or games are you involved in?
MdV: I do paint miniatures, sometimes, but so little time to do that. As for gaming, not really. I like the whole *making a crew up* meta-game, but don’t know many gamers until next month.
I have played Warhammer when I was younger, and Confrontation too…in both cases, to be completely honest, I found the experience less enjoyable than painting and crew-building.
I do like board games, and also games like Space Crusade, Heroquest etc., and I think when I get to miniature gaming, skirmish games (and especially Pulp City) might be closer to that experience.
Collecting-wise, I actually work for the games/ranges I currently like the most…Pulp City, Malifaux, Freebooters Fate and 15mm sci-fi. So that’s also where I’m involved hobby wise. 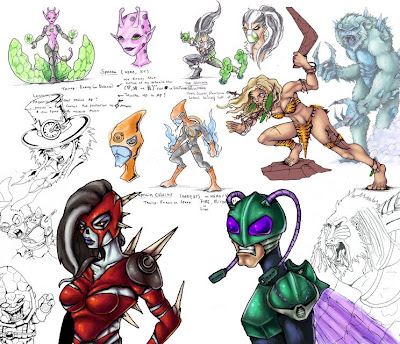 PC: Have you painted many of those figures that have been sculpted from your designs? If so, did you follow your own art as a guideline?
MdV: One; I have finished only a single miniature I did concept work for myself (Puppet Seamus); and there I did follow my own art colors...everything else is in unfinished stages.
I have to admit that I really never had a good place to paint, but next month in my new apartment, there might be more space. I figure that I have done concepts for between 100 and 200 miniatures, so 1% or 0.5% is a really tiny amount of painting.

PC: Ha-ha - you will get there one day, only 99.5% to go! Good luck with the move also. One final question. Would you like to share with the readers a sneak peak of a piece of art for Pulp City that has not been seen before?
MdV: Yep, but it’s so hard to take a pick…we have new master villain called Voices and his lunatic Imps; we have the intergalactic bounty hunter with an attitude Slug Muldoon; and we have Deadguard, the monstrous last missing piece for the Coven players. So, which would you like to see?

PC: I think 100 Voices has been mentioned on the Forum, so I am sure folks would love to see him! Thank you very much for your time Melvin. I really appreciate you taking time out like this.
MdV: Thank you for the interview, it was an honor.

melvindevoor.com (note - this is still under construction)

Also note, that not all of those concepts above will ever be realised in miniature form, and some may have been already, in a different way.


Images © Pulp Monsters 2012, used with permission
Posted by pulpcitizen at 09:59