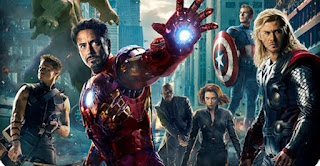 I watched Avengers Assemble last night, when I met up with most of my Thursday night gaming group at the cinema with reasonable expectations of the movie we were about to see.

Those expectations I had? They were surpassed and then some.

I thought the film had a great cast; had some genuine surprises; some great action sequences; moments of humour that had the whole cinema laughing - two key moments with Hulk were hilarious (and intentionally so!); and most of all - it felt 'right' and it 'worked'.

Every character had their moments to shine, and in allocating Joss Whedon to writing and directing duties I think he proved himself a very capable director within this genre, but much more importantly, all of the dialogue felt unique to the characters in question: lines by Tony Stark/Iron Man, Steve Rogers/Captain America, Thor et al all felt true to the previously established Marvel Cinematic Universe interpretations and continuity.

It is a big movie. yes at two and half hours is the longest of the Marvel movies. It is not the longest super-hero movie (Watchmen probably), nor the most narratively dense (again Watchmen I believe, or possibly The Dark Knight), but it was a packed film. There is a little sagging in the middle which was more to do with positioning characters and characterisations, but in all I would rank this as one of my favourite super-hero movies of all time.

Thinking about the list that would probably include The Dark Knight (Avengers does not over-run as I feel TDK did), X-Men 2 (which starts amazingly and never quite lives up to that opening scene again in terms of action - Avengers builds better), Spider-man 2 (Avengers wins in scale, Spider-man 2 in evenness of tone), The Incredibles (I think The Incredibles has the similar problem of sagging a little, but also mixes too much spy-fi into the mix at the expense of spectacle - Avengers has an amazing array of spectacle). On balance Avengers is so strong in so many areas that it may be the contender. That said, I will be very curious to listen to Mark Kermode's review today on BBC 5 Live.

And to anyone going to see it - do, do, stay for the couple of minutes necessary after the initial post-film credits - it is worth it for anyone with some Marvel knowledge.

Possibly my favourite super-hero film ever. I want to see this again - NOW!
Posted by pulpcitizen at 01:28