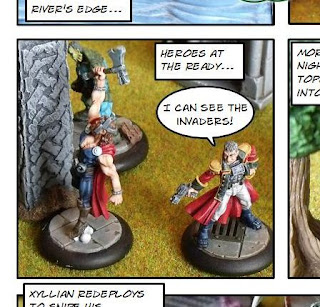 Before I get round to posting the latest (preview in the image, right) I just thought I would post a couple of words about these. Please note that the good pics are pretty much almost always Rob's, so credit where it is due on that score.

I have tried a couple of the comic creator software options, and Comic Life suits me very nicely I have to say. It would be better with some added simple transparent SFX options, but hey, as is it is nice to work with and images after being exported can be manipulated or added to with say Photoshop or GiMP. It isn't free but it is nice. there are freeware products with similar but possibly lesser capability out there.

I have done 4 'comic style' Battle Reports so far, (with a fifth on the way soon, and another redux of an old text and pics type report ready for later in the year), so I hope enough of you enjoy reading them. The spirit and cultural origins of the game suit the style very well in my view.

Anyway for anyone who may have missed the label (Battle Reports), here are links to the four so-far posted Comic Life-created reports:

Rooftop Rumble - an Encounter set on high above the city streets.

Seize the Isotopes (redux) - a Quest ensues as ARC Supremes and mixed bag of Heroes race for experimental isotopes lost on the city streets.

When Rampages the Beast! - Heroes face down a Monster threat!

The Souls of Merlin's Reach - Heroes led by Sovereign seek to protect the lost souls of this pocket dimension within England from the predations of Villains intent on consuming the power therein.