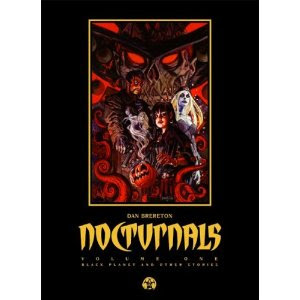 I had been aware of the Nocturnals comics for a long time without ever trying them out. I recently took the plunge with the second hard-cover (it was a cheaper 'tester') and I am so very glad I did. I was even aware of Dan Brereton through the excellent DC Elseworlds story Thrillkiller (sadly out of print as far as I know), I simply missed out on Nocturnals for whatever reasons for around 17-18 years.

The Nocturnals centres on exploits of a supernatural cast of characters led by Doc Horror and his daughter Eve in Pacific City, a fictional California town which seems to have more than its fair share of paranormal activity. The series features an eclectic mix of pulp-crime influenced storytelling, monsters and the phantasmagorical, an array of colorful characters, mostly rendered in Dan Brereton's readily recognisable painted art style.

Nocturnals Volume 1: Black Planet & Other Tales is a handsome volume with its black leatherette cover and nice production values. It presents the stories that are reprinted therein in a great way and so over the last couple of nights (I think this kind of stuff needs to be read at night!) I have dived in and devoured them all.

A fan of comics for over 30 years, my sensibilities have been very directly superhero orientated. I was never interested in other genres such as crime or monsters/horror, yet the Nocturnals takes all of those blending them with verve into a brew that is most heady. Having begun to engage with Dan Brereton's fantastically realised world I only wish I had started sooner - but then again if I had, maybe I wouldn't have been prepared to embrace the stories and art the way I do now, so maybe all good things come to those who wait?

I think Nocturnals is one of those overlooked gems. It has not had the same high-profile associated with Mike Mignola's Hellboy, yet has an equal depth in my view. And yes - I do wish this were made into a movie, by someone like Tim Burton or Alfonso Cuaron.

If you like comic books, horror, pulp sci-fi, and pulp crime, and more besides, then you could do worse than try and pick up one of the collected editions; even if alas they can be hard to find.
Posted by pulpcitizen at 01:39