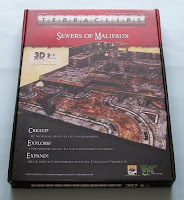 A new buy for me; a new release from Worldworks Games and linked to the Malifaux tabletop minis game.

I have been planning to run some sewer set Encounters for Pulp City for a while now; I can envisage vigilantes chasing down Villains to secret lairs or stuff being 'lost' down below. I toyed with making my own or buying appropriate components.

Time prevented me building my own, and time, cost and finding exactly what I wanted stopped me looking any further with the pre-cast resin options (some nice stuff out there, just nothing ‘quite right’). 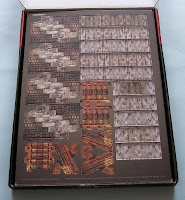 So when I learned of this set (and its companions) from Worldworks Games, I knew it would probably be my best option.

I haven’t bought it as a Malifaux player, but hope it may see some use eventually for generic pulp games, VSF, steampunk etc.

First Impressions
The box felt heavier than I expected after pre-ordering it. On opening the box each sheet looks tightly packed with pieces, so no worries about significant ‘wasted’ space on sheets really – I think they have crammed as much as practically possible in which is good news. 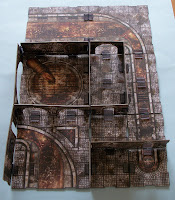 The finish of the card components is nicely matt – I had been worried about seeing a gloss finish to the pieces since that would create possible glare for photographs for Battle Reports.

The parts include floors (in two sizes: 3 inches x 3 inches; 6 inches by 6 inches), walls, archways and doors at 2 inches high and lengths to match the floors; all are double-sided. There are a number of counters also, balcony pieces and stairs for multi-level layouts.

Assembly
I tried a dry fit assembly using the separately available connectors. Popping out the parts was smooth enough for the most part, only some of the very small linking pieces were a minor problem.

Putting a layout together was pretty straightforward, although after doing so I would suggest maybe laying out the whole flat board and planning where you want any walls etc. to save messing around with any need to change connector types. I didn’t try out the stairs at this time or balcony – that will keep.

I found that you need to be careful with arches with narrow wall surrounds – the card would start to bend going into the snug connectors.

All told though, maybe 10 minutes or so needed for a first time layout of 12 x 18 inches, which I imagine will get quicker with familiarity. 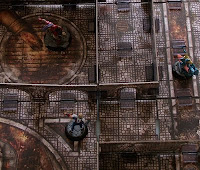 The Good
A single pack offers me the minimum I need and a little more to create a useful Pulp City board for sewer-set games. The art is uniform, no parts stand out too much for any of the wrong reasons and I was surprised that as the layout grew, then the connectors appeared less intrusive than I first feared.

It is nice that all parts are double sided offering a lot of variety. It was certainly a great time saver over what I would have needed to commit to create my own sewer layout. For the time-strapped gamer this kind of product is a real boon.

There are a lot of options for multi-level playing areas which for a sewers with the risk of a flat area creates nice tactical options.

The Bad
The price – it isn’t cheap, especially factoring in the cost of connectors which are compulsory to be able to change the layout at all with some solidity of build. It is cheaper than say some of the resin options out there, but probably more expensive than foam and MDF materials to create my own layout. That cost is mitigated by the fact that the only work needed is assembly. However the cost is compounded by the need to buy the connectors.

While for Pulp City this cost is contained since the required playing area can be thankfully small, it looks like one set will only make a 24 inch x 36 inch square (or permutations thereof) at most. Some creativity with negative spaces blocked by walls may increase that a little further, but the point is that larger areas are going to need more sets, such as the standard Malifaux 36 x 36 inches – it seems curious that the packs have been devised in such a way that two are required to play the game they are linked to. For games using 48 inches x 48 inches as a standard playing area (such as Anima Tactics), then with three or four sets needed I think cost looks to be prohibitive.

Also be aware that care needed with linking some of the finer components, both in handling and what to fit where as there are two widths of sewer channels to work with.

Finally, there is a grid-like approach to things on the board pieces; add in knowledge of wall lengths and application of a little mathematics (thank you Pythagoras!) and games that preclude pre-measurement of distances will be hamstrung by using this product. Just an unavoidable fact I guess.

Overall
I feel it is a product suitable for my needs, and I look forwards to getting in some gaming using the set, but I advise caution for anyone needing more than one set as the cost will be a big investment. I am satisfied with this purchase and will be buying a second sewer set, but won’t for instance trade up my current urban board terrain if ever a city-scape type of set was released.
Posted by pulpcitizen at 04:31