I don't normally do WiP's of Tokens because a) Tokens are not as cool as minis and b) they are a basic gaming commodity, but because I needed to get back into making stuff to play the game I thought blogging about these would help; well help me get kick-started (yet again!) at the very least.

While fixing some gaps on some Ninjas and Sensei, and while realizing there are plan that I have had unfulfilled for my Pulp City gaming possibly even longer than the Hadron project, it was time to get some stuff done.

So on to a couple of Tokens. Now it may not be immediately apparent, but these are pretty big - 150mm or around 6 inches!

The Nuclear Waste Token is to accompany new rules for Nuclear Jones, while the Black Swamp Token is something I wanted to do a long time ago for Francis Gator; I had cut some discs to do the Black Swamp Tokens a long while back, but they just did not look right. So some time last year I picked up these huge blank bases from Fenris and finally have decided to put them into use.

I have ordered a product called Magic Water which can be mixed with acrylic paint to add some pigmentation, so that will be a stage completed as soon as possible so that I can try these out next week. There will be a green hue for the Nuclear Waste and a brown sludge like colour for the Black Swamp.

Hopefully finished pics next week. The pics below show the associated minis for scale reference: 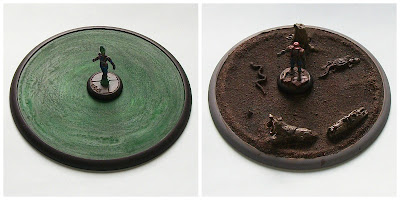