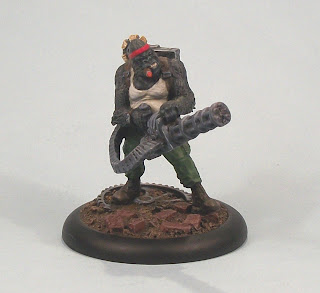 Guerilla works for both Villains and Heroes, the apes side with anybody who is either eager to promise them enough money or enough recognition in the Pulp City media.

Guerilla has taken a long, long time in finishing. I would start doing bits of the mini and then it would be shoved back into the back of the working shelf or area until the next time, each abandonment simply due to lack of clear idea of how I was tackling it. It has been a source of frustration that I was not able to finish this in both a timely and fully satisfactory manner, but such is the peril of a creative hobby I guess. 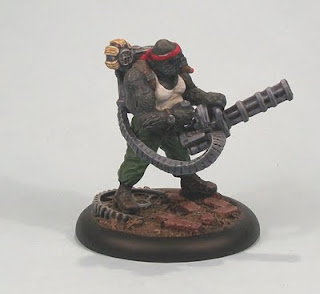 Now, while it looks like a very basic model in some ways, the large 'metallic' surfaces with varying textures really threw me off, as did simple things like trying to work out how I wanted to highlight bits like his boots etc. The upshot is that it has taken me months from originally applying the first base colours to recently finishing it. While I am not 100% happy, it has turned out better than it was looking just a couple of weeks ago, so it is done.

I find it ironic that Guerilla is one of the earliest minis for Pulp City, and one that really grabbed me when I saw the first previews (2007?), yet it took so long in the completion. In fact it was completed alongside some of the newest minis, and it represents the last of the Starter Set minis I had to do. What that means is that I no longer feel burdened by a back-log that included stuff that had been waiting for a long time to be painted or finished. Hopefully that will help mitigate future painter’s block – time will tell! 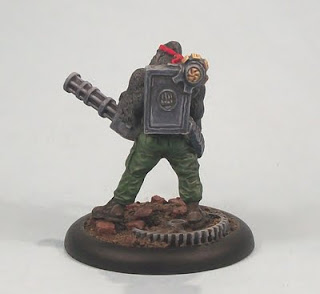 In game terms Guerilla is one of ARC’s revolutionary leaders; he able to work well in close combat and at range, and so can be pretty devastating. When the options to upgrade a Level 2 ARC mini to Level 3, expect Guerilla to become an even bigger threat!
Posted by pulpcitizen at 00:29