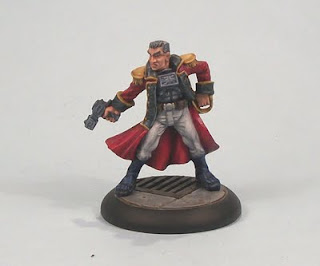 Sovereign is more of an idea passed down the generations than a real man of flesh and blood.

My first new mini post in almost 2 and half months; moving house had a considerable effect on my output. On the plus side, painting/finishing off this latest batch was 'easier' than painting has felt for a while, probably due to the break I have had.

I picked Sovereign up at Salute 2011; Maciej was determined to get him ready for then and didn't fail. I even used the 'studio' version to run Pulp City demo games with on the day, and so trust me when I say he is one tough hombre. 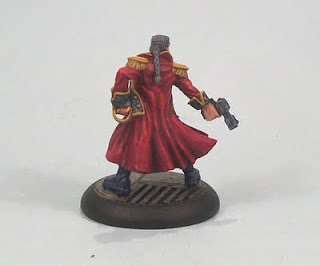 I knew straight away I wanted a red-white-and-blue primary theme, even if I did not trust myself to accurately render a coloured version of the union flag mounted as part of his body armour - hence that painted as I continue to persevere with hopefully improving my NMM technique. Still a long way to go, however.

Sovereign is one of the first 'Direct Only' minis from pulp City, intended to be available from the Pulp City/Pulp Monsters web store and at some conventions and shows. I love the design even if it isn't to everyone's tastes; to me it strongly echoes typical 2000 AD style characters and so is a nice reflection of the difference between British and American comics characters.
Posted by pulpcitizen at 08:43