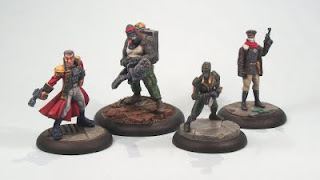 For anyone not following this 'thread' of my posting, I embarked on a quest (my self-imposed Pulp City Painting Challenge) to paint at least one of every (then) available Pulp City miniature before the end of 2010. I didn't succeed, but I gave it a shot. Setting the deadline probably helped me get far more painted than I would have otherwise done - I can be a slow/lazy/easily distracted painter as my main gaming buddy Rob will happily confirm, I am sure!

I had set out with an aim to paint around 55-60 minis in 2010, hoping that would achieve my goal, but I think there were probably slightly more minis released than I accounted for, and a couple of months yielded particularly poor output from me.

So carrying on the Painting Challenge to this year and the first few months were especially unproductive until a better April when things picked up a little. Then the house move loomed and my output dwindled to nothing once more. July has felt rewarding after all this simply as I painted or finally completed 4 minis (although they may get a little touch-up before varnishing - I still consider them 'finished'). Looking back on older posts shows that Guerilla had base colours on at least as far back as December 2010, so at least 7 months from start to finish just for that mini alone, and maybe even longer than that.

With some waves of new releases looming, I hope to kick into gear as I seemed to at the tail end of 2010 (I think I painted 13 minis in November and December), and I have a raft of non-Pulp City minis I want to get painted for a special Pulp City Encounter later in the year to be played with Rob. So onwards with the Challenge; currently 4 minis remaining, but of course there will always be more on the horizon...