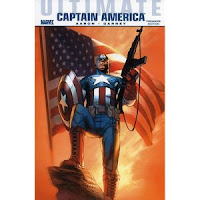 I love the Captain America character, I really do. Being British of some Finnish and Swedish ancestry, I have no nationalistic allegiance to Cap, but if ever I wanted one super-hero to be real, to be the man to save the world, Cap would probably be that man. Of course in that I am referring to the Captain America established in mainstream Marvel continuity whom I first read about in the early 1980's in issues of both his own comic and later the Avengers.

This is not that Captain America. And the character is probably more entertaining for that fact.

This storyline plays out strongly in Ultimates 2 and may be something I post about at some other time. In addition Ultimate Cap is able to play the man-out-of time character aspect that doesn't really work anymore in the regular Marvel universe since that Cap has been so-long established. What we have is an old-fashioned and very un-PC super-human who does things his own way - kind of like the public persona of Clint Eastwood in Brad Pitt's body with super-powers.

So after that preamble we come to Ultimate Comics Captain America, a four-issue mini series recently collected into hard-cover (I presume the paperback will be available now or soon). As with UC Thor previously, this no doubt was designed to pick up on buzz for the associated movie. Regardless of that decision, I think it is a worthwhile book. Jason Aaron writes Ultimate Cap as mostly recognisable from the Mark Millar blueprint (although maybe a little more potty-mouthed than I recall), while Ron Garney offers some very dynamic and action-filled art. The plot centres on Cap's hunt for a rogue US super-soldier who fell off the radar during the Vietnam War. The story is shot through with concepts and imagery recognisable from Vietnam war films (an antagonist that can be seen to have parallels with Kurtz from Apocalypse Now/Heart of Darkness) and recognisable soldiery/war imagery (one issue cover recalls the classic image of helmet resting on upturned rifle).

The emphasis is strongly on the soldier element of the super-soldiers involved. The plot is fairly recognisable as being about two men with similar backgrounds both coming to represent polar opposites in the roles they cast for themselves and the objectives they have. Along the way Aaron as writer shows a Cap that is not ignorant of the fact that the world he awoke in after decades in suspended animation is not the one he left. He presents Captain America as a man who is principled and determined and ultimately heroic, while communicating that the guy can kick ass. A fun read and mostly in-keeping with the Ultimates canon that I have enjoyed (Ultimates 1 & 2; Ultimate Comics New Ultimates; Ultimate Comics Ultimate Avengers 1, 2 & 3; Ultimate Avengers vs. New Ultimates; Ultimate Comics Thor). For anyone who has enjoyed those stories but not picked this up, then I thoroughly recommend Ultimate Comics Captain America.