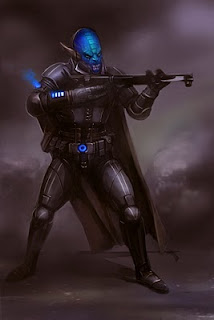 Part 2 of the interview that I conducted with Maciej in April, at Salute in London.

I cannot thank Maciej enough for graciously giving me his time, both on the day and with some follow up questions, and for supplying a couple of cool images to accompany the interview. For me it was great to get a sense of how things work for a manufacturer.

ON HEROES WITHIN THE INDUSTRY
Pulp Citizen: Pulp City is a game about heroes and villains, so who are your heroes in the gaming world?
Maciej Żylewicz: I would definitely have to stress the people that I have a great co-operation with. Rob from Darkson Designs – what an amazing guy; we know each other’s pains and we know each other’s successes. So he has given me a lot of support, he is definitely my hero. Other heroes – Stewart Griffin, the best caster in the world; the kind of guy you can rely on. And you know, when I have heard only spectacular things about him, I thought there was some British bias towards him, “He is one of ours so we have to support him”, but you know he is just unbelievable, he is not a craftsman, he is an artist. And then I have to mention Przemek from MaxMini. You know you sometimes just call these guys and talk about the things that have happened. It makes you feel as though you have gone to therapy [laughs]. Those are my heroes. I’ll keep my villains hidden [more laughter].

PC: it seems quite a modern and recent phenomenon in war gaming, but in the last decade or so we have seen a lot of other manufacturers come through.
MZ: I think it looks very simple to do, especially from the outside. And if you have got the sculptor on your team, it looks like a perfect investment; not that many costs and a lot of income, but that is half true because you can reach the garage level, and then when you try to go out of it you either succeed or you fail. And as you look at some of the skirmish games that have been around for quite a while, they have not disappeared, but they are sort of in the recess.

PC: Within that context – you see Pulp City as growing – you don’t want it to get to that stagnation?
MZ: Definitely. That’s the death of the game, let’s face it. The next step is you can go all direct sales and sort of fold yourself up back to your little comfort zone. So I don’t want to do that.

PC: So in that, where would you like to see the game in twelve months?
MZ: What’s going to happen? My plan is to have the printed rule-book around Gencon time in August- September. It is extremely difficult, especially when you start your journey; there is twenty volunteers- begging to do something for the book. And then suddenly your contact list on Facebook or on your email suddenly grows short as those people suddenly stop replying to your emails. So I got over it easily. It is always a little frustrating – I can understand real-life taking over, but I cannot understand why people would switch off, suddenly hiding somewhere and not replying to your emails.
Some people need the printed book validation to say ‘this is the game I want to commit myself to’; it is always an easier start once you have a reference source. And after having some hiccups with the sculpting process, I do have a lot of sculpts lined up, and each is really good quality. Yes, I am really happy about how they turned out, and also how much fun they will provide people game-wise and hobby-wise.

ON FUTURE PLANS
PC: You’re a business man, you have other interests, but knowing you are a business man you probably work in short, medium and long-term plans – so what do your plan for the medium term?
MZ: For me the medium-term plan is August, Gencon, and being able to deliver the game launch supported by something that will happen for the first time on a bigger scale which is tournaments, have a bigger event, and have at the same time introduction of all great rule changes in the book. Now this should be followed up closely by my sales guy raising the awareness of the game, and those are the things you cannot build overnight. He has actually been in the industry for a couple of years and knows exactly which people are responsible for what, and knows how to make the game go around. So I am putting a lot of hope on that.
That will be my medium-term plan, as for the long-term plan? The result of those combined works will answer the basic questions: can we keep up the same production volume? Can we keep up the same new releases volume? Or should we step up in a bit, or slow down in a bit? It is all going to be verified by the market.
I do have some other plans, but they are absolutely not Pulp City related, they are Pulp Monsters related.

PC: So is the Pulp Monsters stuff further down the line? Much further?
MZ: I won’t answer that, I honestly don’t know.

PC: Do you get time for your hobby at all?
MZ: No. Recently absolutely no hobby time. I recently managed to get time to paint a crew for Darkson Design’s game, AE-Bounty, but that required me to get three models painted to enjoy the game. I am lowering my expectations each year because I used to claim that I am not able to play games that require ten or more painted models, now about five models I guess. So Pulp City fits the bill.
I am actually pretty fast [as a painter] and people are amazed how fast I get those minis painted. It is about a lack of time, or you come back and you feel so mentally strained that picking up the brush...it used to be about relaxation for me, but recently not, I don’t know why, but I do enjoy other activities as my free-time, more.

PC: One final question - any other scoop or revelation for anyone who may read this?
MZ: Okay. Let’s see. Some people may already know this, but around August there will be a whole bunch of new Supremes that are aliens, and these guys will introduce some interesting synergies in the game, being the invaders, making Heroes stand side-by-side with Villains, and taking on the new challenge.
You will also see some different sculptors featured. I know there is a lot of demand for the fan-favourites – they will still be there, but you will see a lot of new sculptors. And this time again I am extremely happy to say that I didn’t have to step back in terms of settling for quality because these guys are my personal heroes in terms of sculpting.
There’s going to be one more thing that everyone might find surprising at Gencon. You have got to look for the preview of something, but I am not saying much more about it. I am looking for new avenues of artistic production, so I have been experimenting a lot with 3-D sculpting, and as much as it is a pretty common tool when you deal with mass combat games and you deal with a huge budget, in the skirmish world I guess 3-D sculpting is still not the most obvious choice. So, the results that you see sometimes online of other sculpts, while I admit that I love some of them (like the Kingdom Death stuff, it is really amazingly well in some cases digitally sculpted), I am aiming at this level or higher.
I am looking forwards to as well, that 3-D sculpting allows you the amazing ability to sculpt bigger miniatures for relatively the same cost as you would end up paying for a regular human-sized miniature, because the designer does not have to spend more time.