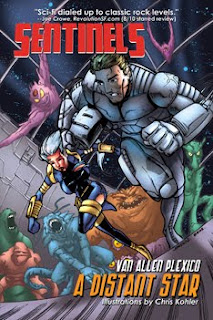 I have just finished reading the second volume of Van Allen Plexico's Sentinels series - A Distant Star. Picking up shortly after the events of the first novel, A Distant star brings back much the same cast as survived the first book.

The Sentinels is a prose superhero series with a growing cast set in a world and wider universe that feels to me tonally like Marvel in the late 1960's and 1970's. In that context, the Sentinels - Ultraa, Esro Brachis, Pulsar, Vanadium and newcomer Mondrian - face threats to the earth both new and old.

As ever I won't give away too much detail about the plot, but in essence new threats emerge in the form of a giant adapting robot, and other forces taking heightened interest in Earth. This robot threat (the Xorex) has been recognised by an interstellar civilisation that has problems of their own; and this civilisation (the Kur Bai) are prepared to take any measures necessary to end the danger that the Xorex poses. At the same time on Earth, shadowy government officials are squeezing out the Sentinels while building their own more malleable superhuman resources. And behind all of these events we see the first signs of great cosmic powers that have taken interest in the Earth. There is much, much more going on, but that hopefully gives a taster.

I really enjoyed the first book, especially as it was so quick to read, and the prose was nicely written. This second book I found more difficult. Compared to the previous volume it felt like it sagged or plodded in the middle, after a vibrant start. I put this down to splitting up the characters too early into the book; the use of time displacement; leaving plot strands untouched or undeveloped for extended passages; while focusing heavily on the adventures of just two characters (Brachis and Mondrian). Basically there is probably too much going on, and in that the various separated groups of characters are too much independent of one another. This is compounded because the author is clearly writing in arcs or multiple books, therefore sowing some sub-plots for development in later volumes. When Brachis and Mondrian reach Earth in a more stable manner, things pick up again and I found the book much more enjoyable from that point onwards.

If you asked me to liken this series to any one comic book franchise, I would suggest Marvel's Avengers. There are elements that while not copies of Marvel in the 1970's, just have a similar or recognisable vibe. For Marvel fans of a certain age, think about the Avengers under Roy Thomas, stuff like the Kree-Skrull War, and also work by Jim Starlin (Adam Warlock's cosmic tone). I think any fan of Marvel's Avengers, and their cosmic tales as well as superhero prose, would do well to pick up A Distant Star.

On the whole I enjoyed A Distant Star, but not as much as the first novel. That said, I have already cracked open the next volume and await to see how that turns out.