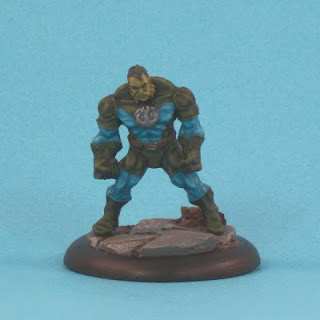 "Tritonious, they treat you like a monster, a freak even without knowing the monster your father is. How can you be still pretending you’re a part of this?"

One of the newest releases, Tritonious was in the bundle of minis that arrived at the beginning of the week. Having recently finished Twilight and Gentleman Sniper, two of the earliest sculpts in the Pulp City line-up. I quickly had an idea for a colour scheme and so he was finished pretty quickly for me. His belt still needs a wash, but other than that I will probably leave the mini 'as-is'. Not perfect, but finished enough for my purposes, especially as I have had another painting block of sorts lately. 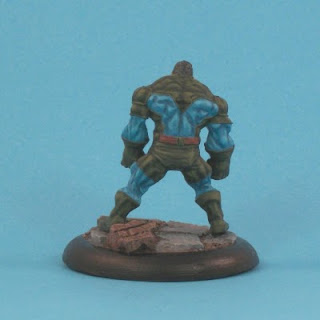 The colours are different to those for the 'official' version; I chose the green and turquoise to evoke a water/nature feel. I elected not to pick out the piping in a different colour because the two options I tried just didn't work for me.

In game terms Tritonious is a Level 1 Supreme suited to Close Combat as well as having Water-based synergies and control thanks to his Exclusive Actions.
Posted by pulpcitizen at 08:18