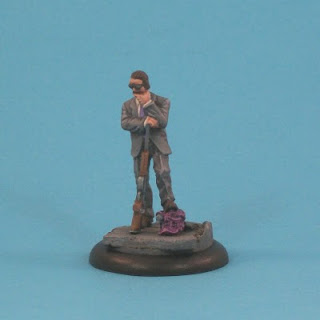 Gentleman is not utterly evil, he considers moral standards more or less a matter of individual taste. Just as you may like a Prada suit, so you may like being a hitman.

A long time coming getting a Gentleman Sniper finished - this was not the first version I started (there is another that I will get finished one day that will have a cream suit. In the interim this was painted simply to get a model done amidst my latest bout of painters block. I had hoped to use an alternative sniper rifle from RAFM, but it was too big to fit adequately; I may try and fit it to the other currently-abandoned version.

Unfortunately when I painted up the model, I came across some pitting on the face that I hadn't really seen during clean-up; by that point it was too late so a case of having to accept the situation or abandon this one as well - that was not going to happen. 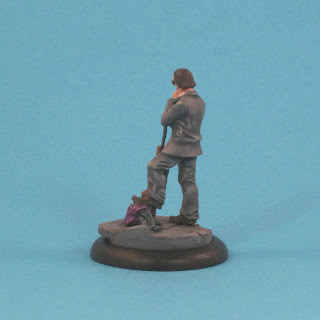 I rate Gentleman very highly as a utility Supreme for pretty much any Team; his combination of Merc and Greed 1 makes him a great option to fill a gap in any selection. Even after the release of over 50 Supremes so far, he still offers promise in numerous circumstances. One consideration I may look at his using him with an atypical Resource - the Silencer gun usually used with Twilight. It would require a mainly coven Team, but would allow Gentleman increased stealth-and-shoot capability.
Posted by pulpcitizen at 08:57