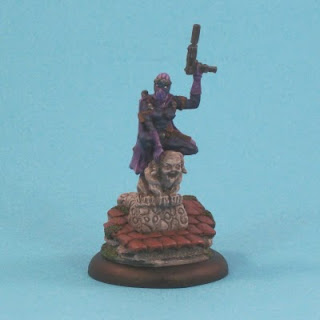 One of the first minis released for Pulp City, I only finished Twilight last month. Overall, I am fairly pleased with the results - not a perfect paint-job, but then I am not a 'perfect painter'; instead I aim for what I think of as a 'pleasing tabletop style'. When I say pleasing, that is all relative and it is on a very-much personal level as to what I feel is pleasing. I don't have the talent, skill or time to try and paint to a better level, so I accept my painting for what it is - mostly - imperfections and all, and ultimately intended to be used in games since at heart I am a gamer first.

Twilight was ultimately fairly nice to paint as a model; more so than I initially anticipated. Nonetheless I had put off painting Twilight for quite some time as I hadn't wanted to go with the colour scheme I used. However since I could think of no other, it was the one I used, despite the similarity to the 'official' scheme. I like the colour combo - it is reminiscent of that used for a favourite character of mine from Malibu Comics' Ultraverse (Solitaire) - I just wanted to do something more original. Oh well, maybe if they ever re-do the mini I'll get the chance. 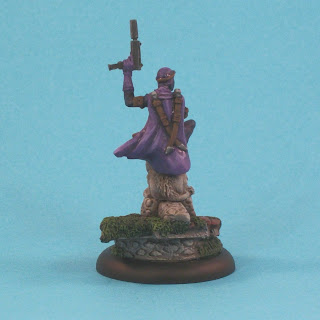 In game terms, Twilight is best used for harassment, stealth and hit and run attacks. I look forwards to using her in a future game.
Posted by pulpcitizen at 08:40